Following are just a few reports from Salvation Army corps (churches) that have hosted campaign visits from Majors Joseph and Lois Wheeler, the USA Central territorial evangelists and spiritual formation secretaries. The reports reflect how God has used the Wheelers’ multifaceted ministries.

Oshkosh, Wis.—“Everyone who went through the Wheelers’ spiritual gifts seminar was excited to discover what their primary gifts were, and many discovered gifts they didn’t realize they had,” said Auxiliary Captain Don Karl, corps officer (pastor). “Our corps sergeant-major was totally amazed at how his spiritual gifts matched his position. It brought clarity and assuredness to him. Our congregation is now excited and eager to see how they can be more involved in ministry on a day-to-day basis.”

Omaha North Side, Neb. Corps—“Several people received the gift of salvation during the Wheeler’s visit, but Thursday morning during day camp was the most amazing experience. Major Joe gave a great devotional and presented the gospel. He asked children who wanted to make Jesus their friend to come forward. The center aisle was lined with children of all ages, along with some of our staff!” reported Lt. Pam Kasten, corps officer.

Kansas     City, Mo.—Major Troy Barker, adult rehabilitation center administrator, said the Wheelers’ spiritual gifts seminar helped a program graduate who felt called to fulltime ministry. “The seminar put an exclamation point on God’s special plan for his life,” the major said. “The Wheelers do a great job and are very sensitive to the needs of the men in the program.”

Jackson, Mich.—Corps Officer Major Carrie Pollom said, “Five young people gave their hearts to the Lord during vacation Bible school [led by the Wheelers], and several people in a worship service were greatly moved by the Holy Spirit as the Wheelers ministered.”

Leavenworth, Kan.—Captain Rick Hamelund, corps officer, reported God spoke to heart of a teenage boy during the Wheelers’ youth-night presentation. The next morning during worship,  the teen made a decision to change his life and attitude.

Belleville, Ill.—Weeks after the Wheelers’ campaign visit, Corps Officer Captain Heath Sells was approached by a woman who had attended the “Extreme Makeover” series. “She said the Lord had convicted her of her smoking habit, and she hadn’t smoked since!” 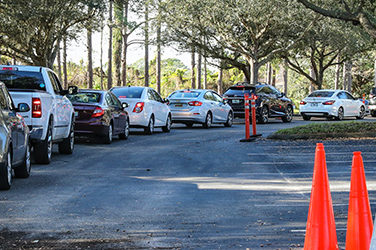 As state and city officials, as well as medical facilities, throughout the region respond to the COVID-19 crisis with testing ...