The Salvation Army in Haiti is assessing the damage caused by Hurricane Matthew and putting in place plans to help some of the thousands of people who’ve been forced from their homes. Winds of 145 miles per hour, accompanied by heavy rain and storm surges, have brought devastation across much of the country.

The greatest need is funding to provide food and drink to people in temporary shelters.

Southern Haiti was particularly badly hit. In Fonds-des-Negres, a Salvation Army school was among several buildings to lose their roofs. The local corps (church) was damaged by a falling tree and the area has suffered significant flooding. In Aquin, a Salvation Army school that was sheltering people whose homes were at risk also lost its roof. In the coastal community of Saint-Marc, The Salvation Army has been hosting about 100 people, and more are being cared for in La Fosse, where flooding has forced people from their homes. Mobile and landline phone connections also are down across the south.

First reports indicated two people were killed in the disaster, although this number is likely to rise. One death was the uncle of divisional youth secretary, Captain Jean Volant.

Salvation Army officers and staff in Haiti are more than ready to provide the help needed most particularly after having recently attended a disaster preparedness course conducted by International Emergency Services. 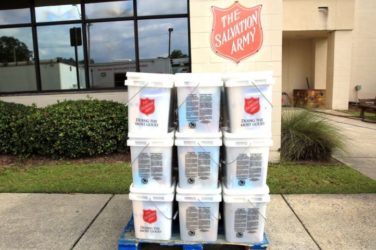 The Salvation Army Responding to Tornadoes in Douglas, GA