“Exponential increase,” exclaimed my finance strategy professor, bouncing a tennis ball hard onto the classroom floor. With each glancing blow to the floor—“present value”—then recapturing and suspending the ball in midair—“future value,” the professor instilled into his students the value of money over time.

It’s an important concept in the world of business, rightly so, as finance is the language of business. “Return on investment” is the bottom line in mankind’s economy; everything else is the cost of doing business. Not so in the Kingdom and economy of God, however.  In His economy, there are many “bottom lines” and measures of success.

Yesterday was spent wrapping up a week-long seminar with the usual Sunday morning preparations for worship, only in the different setting of a hotel banquet room filled with fellow writers from around the world. I had spent the week “investing;” developing emerging skill sets in anticipation of a “return” somewhere over time.

Soon the worship service would end, followed by a few goodbyes, then off to the airport. I grabbed a nice lunch then a free ride, which dropped me off nearly eight and a half hours ahead of my scheduled flight. It was too soon to check baggage, leaving me sitting in the terminal with nothing to do except pray and ask the Lord to send someone to whom I could witness of His great love. An “investment” opportunity came unexpectedly.

I had decided to remain in my Salvation Army uniform from that morning. I was glad because the room was large and cold. There I sat, in full dress uniform reading my Bible when I sensed a presence over me.
I looked up and was greeted by an awkward smile from a tearful-eyed young man. “Would you like to sit down?” I offered. A head nod later, we were engrossed in conversation as he revealed the spiritual wounds inflicted upon him. Knowing a bit of the Army’s work and mission, he’d been drawn by my uniform and Bible.

With each word, time passed. He departed without a prayer of salvation but with a seeking heart. I turned him over to the Holy Spirit to convict and heal his hurts—“present value.”

“Send me another, Lord,” I prayed. Time slowed.

At 5:00 p.m. I gladly checked my bags, cleared security screening and crossed into the gate area, once again grabbing a quick meal with prayer still lingering on my lips, “Send me another, Lord.” The evening was spent trying to talk to people who were plugged into everything else except others. I kept praying.

Soon boarding was announced for my flight to Omaha. A three-hour drive from there would return me home at 1:30 a.m. Monday morning.

I stepped off the plane and headed to baggage claim. No other had been sent my way.

I grabbed the bags and exited the building, searching for the shuttle that would return me to my parked car. It pulled up just as I stepped out the door.

“Your timing is exemplary sir,” I greeted the driver. A pleasant man, he drove as we exchanged small talk. I shared where I was returning from, my journey and upcoming schedule—home Monday then departing Tuesday for yet another conference, followed by a trip the next week to India (cancelled since then).

“I’m with the Salvation Army,” I replied.

“Salvation Army? They sure helped me when I need it!” was his response. “Yes sir, I love The Salvation Army!” His face beamed with joy.

I was receiving the accolades of the work done by others, but it paved the way for us to stand over my open car trunk praying together—“future value.”

Pondering this while driving home, my only other thought was: “Send me another, Lord!” 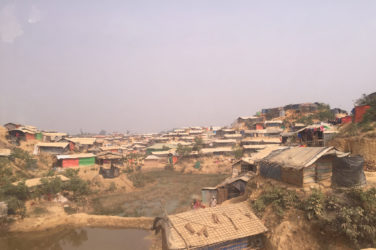 London, 13 July 2018/IHQ/ – THE Salvation Army in Bangladesh is to begin working in camps housing Rohingya people who ...

Nearly $1.2 million in incentive grants has been awarded in the territory through the Thomas Lyle Williams (TLW) Fund. The ...

The annual D.J.’s Heroes award luncheon held by The Salvation Army’s Western Division in Omaha, Neb., is “all about young ...