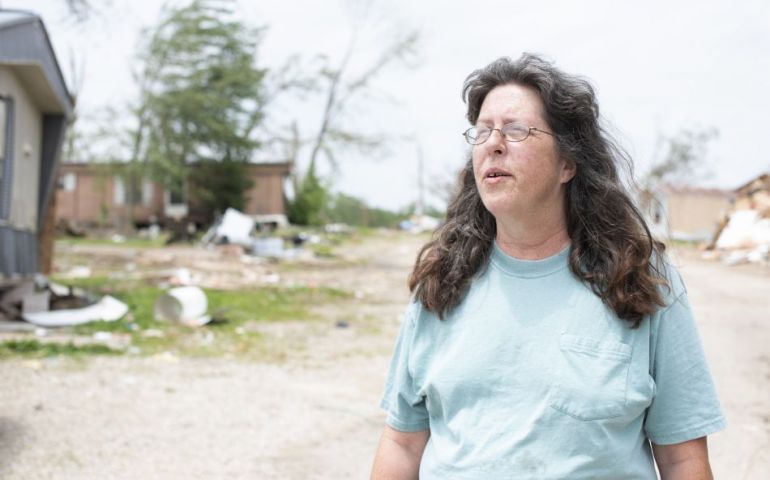 Jefferson City, Missouri (May 28, 2019) – The TV announced the tornado would hit Jefferson City in just a few minutes. There was no time to run. No time to seek safety. The closest shelter was anywhere from 10 to 20 miles away.

“We had to stay and ride out the storm,” said Bonnie  McBrearety, who lives about eight miles outside the city limits of Jefferson City. “If I had been a few minutes later pulling our son out of bed and to the middle of our home he wouldn’t be here today. Debris fired through the walls of his room and where he was sleeping when the tornado hit.”

Heritage Highway was one of the areas hit hardest by the tornado on May 22, 2019. As Bonnie walked along the road, once more taking in the damage, she finally turned back and looked at The Salvation Army Disaster Worker walking with her. “There were 10 homes here, only three are left and they are all damaged and will probably be leveled.”

The Salvation Army following the tornado delivered meals, drinks, snacks, and kits to the residents along Heritage Highway daily. Never failing to stop by the mobile home park and checking on Bonnie and her family each day. “The Salvation Army has been wonderful. They’ve been so helpful.”

Major Paul Ferguson sat down with the family as they ate the meals The Salvation Army provided, while one family member was making calls to their insurance company. He gave Bonnie information on other ways The Salvation Army would be able to help in long term recovery. Before leaving the family he asked if he could pray with them. All bowed their heads as Major Ferguson prayed for strength, not only physical strength, but strength of spirit and hope.

To help support those affected by the tornado and Jefferson City and Eldon please visit www.donate.stlsalvationarmy.org/springdisaster or Text to Give at SPRINGDISASTER to 41444.

To learn more about the work of The Salvation Army visit salvationarmyusa.org, or locally at facebook.com/SalvationArmyJC.

CSB Sounds of the Season: Round Up 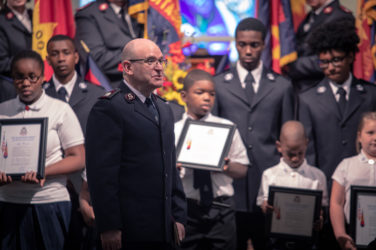 THE visit to the USA Southern Territory by the Chief of the Staff (Commissioner ...