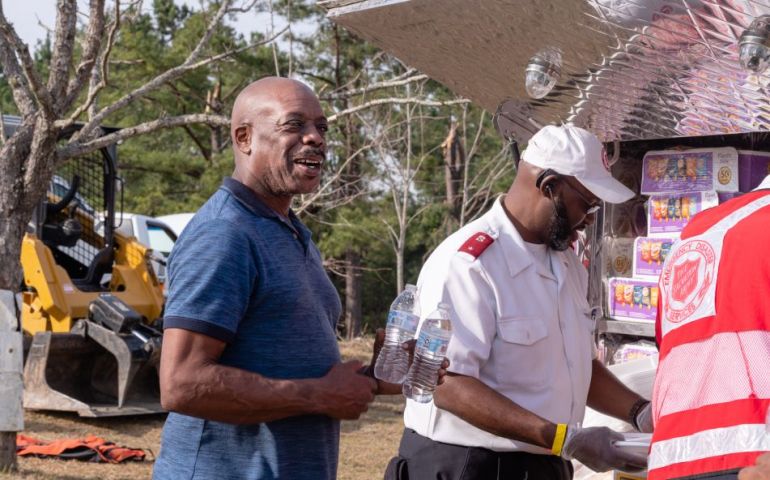 Beauregard, AL (March 8, 2019)— President Trump toured the tornado ravaged Beauregard community on Friday, and The Salvation Army was on hand, ready to serve survivors, volunteers, and work crews. The level of security required for a presidential visit meant that the highly secured disaster area was locked down tight until the president concluded his visit, but The Salvation Army was on the scene—ready and eager to get back into the area and back to helping the people.

As soon as the area was cleared for those granted access there, which still isn’t open to the general public, The Salvation Army canteen (mobile feeding unit) was in high gear, grilling hamburgers, hotdogs, and chicken for the people doing the massive ongoing cleanup effort. “Some of the people that we served said that it was just what they needed. That it was a godsend because God knows exactly what to send at the right time. We were there to fill that need,” said Lieutenant Bryan Farrington, who was working at the canteen as soon as people were allowed back into the area.

“I think it’s wonderful because I thought I was about to starve to death,” said Eric Bush, who took a break to eat a burger from the canteen. Eric is volunteering to help a friend, using his tractor to remove limbs from what’s left of his friend’s home. “It is awesome to see the presence of The Salvation Army helping feed people, and everybody just here to work, to try to pitch in and make a difference. It doesn’t matter what you’re doing—if you’re cooking hamburgers or moving limbs or picking up trash—it takes everybody,” Eric added.

As the weekend approaches, with Sunday marking one week since lives in this community were changed forever, emotional and spiritual care was again the greatest need. “It was good to be able to love on the people who were most affected by the storm and to hear their stories. To be able to share God’s love, to help them smile for a minute, to relieve some of the stress and strain. Words can’t describe what you actually see there, but it’s very rewarding to have an impact, to brighten their day for a moment and encourage somebody while they’re going through the midst of their trials,” said Lt. Farrington.

“This may seem impossible, but through faith it is possible. Through faith all things are possible,” said Napoleon Darby, resident of the hardest-hit area of Lee County. Napoleon’s home is destroyed. His is a tight-knit community with mostly family members as neighbors, and some members of his family didn’t survive the storm. There‘s a distinct heaviness in the air, and you can hear the deep pain in his quiet voice, but he refuses to let himself sink into despair. He’s choosing to focus on the good. Napoleon met President Trump on his tour of the area Friday, and it left a positive impression on him. “I shook his hand and talked to him, shook his wife’s hand,” Napoleon said.

Of his visit with Salvation Army officers on the same day he met the president, Napoleon says, “This is a testament that there are lots of nice people that care about people in the world. It’s easy to concentrate on the hate in the world but when you get exposed to the love in the world you have to lean more towards that.” 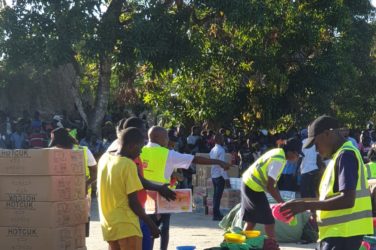 Cyclone Idai swept through southern Africa – bringing flooding and devastation to communities in ...