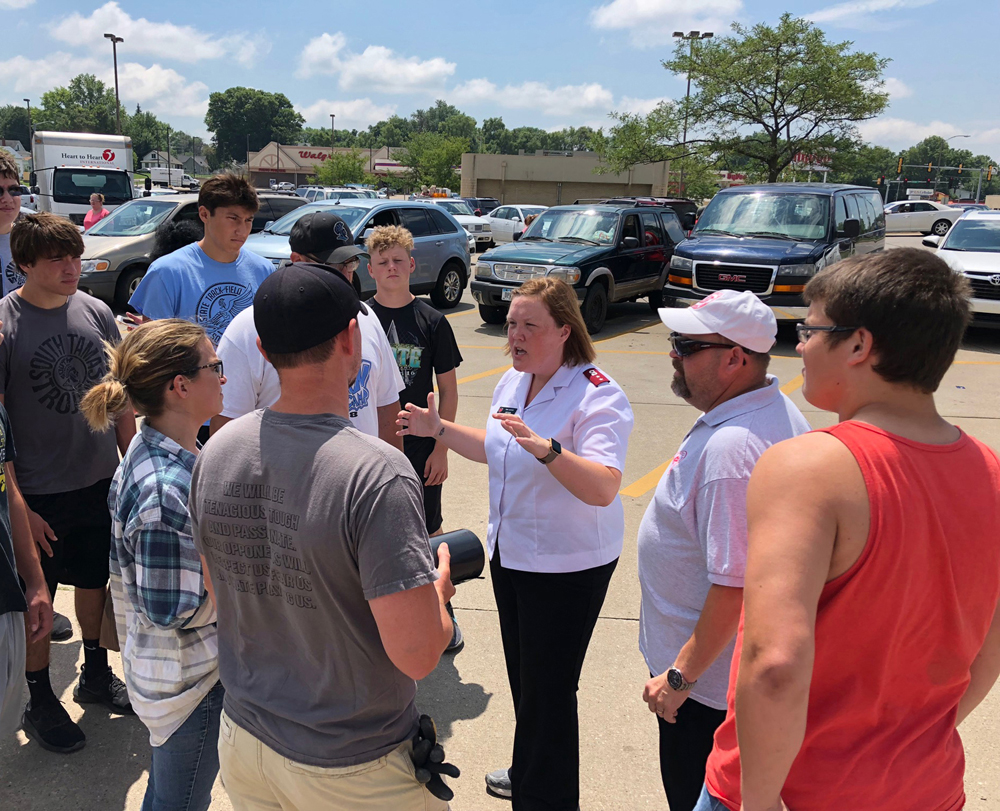 The EF-3 tornado that hit Marshalltown, Iowa, on July 19, 2018, pummeled buildings, destroyed houses and even ripped the cupola off the historic courthouse, but its devastating effects were quickly quelled by the loving response of Salvation Army officers, staff and volunteers.

Captain Pam Kasten wasn’t even a month into her new appointment as corps officer in Marshalltown when the twister struck late on a Thursday afternoon. But by evening, she was taking charge—spearheading the Western Division’s emergency disaster services (EDS) relief efforts as incident commander with the support of divisional EDS Director Joel Arthur, who’d driven out from headquarters in Omaha, Neb., that same day.

“It was such a shock,” said Captain Pam. “The storms came on so suddenly; there seemed to be just enough time for everyone to get to shelter.”

They would soon discover, along with fellow EDS responders, the scope of the disaster: the 144-mile-per-hour winds of the tornado had torn a path several blocks wide right through the middle of downtown. More than 700 buildings were damaged, many of them severely. Ten thousand people were left without power—nearly half the population. The town’s main hospital was forced to close. What’s more, the high winds tore part of the roof off the Marshalltown Corps, leaving the captain without a base of operations.

The response to such a storm had to be big—and it was. EDS leadership set up an incident command area in the parking lot of a local supermarket. Volunteers drove Salvation Army canteens in from all over the state including Fort Dodge, Boone, Cedar Rapids and Iowa City. Meanwhile, staff and additional volunteers began descending on Marshalltown from all over the region, as far west as Nebraska and as far east as Indiana.

Among those responding from a long distance was Ken Locke, an employee and soldier of the Warsaw, Ind., Corps. Born and raised in Marshalltown, Ken got in his truck as soon as he heard the news and drove over 400 miles to help with relief efforts.

“I love Marshalltown,” Ken said. “This is home. It’s just sad to see something like this happen to it.”

“I went down to Fourth and Bromley where I grew up and started handing stuff out,” Ken said. Turns out that as Ken was helping his hometown, his hometown inspired him. “Seeing neighbor helping neighbor is amazing,” he said.

One of his fellow relief crew members didn’t have to travel nearly as far to pitch in, but had a “storm story” just as unique. Doris Day—a local radio journalist and longtime Marshalltown resident—rode out the storm inside the basement-level studios of her downtown radio station.  She was working as part of the station’s broadcast team when the tornado roared by overhead.

“We stayed on the air; we told people to take cover,” she recalled. “All of a sudden, I could feel it in my headphones.”

Once the tornado had passed, Doris and her coworkers ran outside and were shocked by what they saw. “It was just devastation. It was a nightmare,” she said.

After checking on her family, Doris went to volunteer for The Salvation Army. She spent much of the next several days staffing the canteens at the incident command area, making meals for storm survivors.

“It’s been absolutely great to be able to help out,” Doris said. “This community is coming together. God is taking care of everybody.”

This sentiment reached all levels of The Salvation Army’s response team from the newest volunteer to the incident commander. For her part, Captain Pam marveled at the scope of the response: people from three different Salvation Army divisions stretched out over a distance of a thousand miles all coming together in a small central Iowa town to help people they’d never even met. Indeed, by late Monday evening in Marshalltown, officers, staff and volunteers had served 15,273 meals, 74,721 drinks and snacks, and handed out more than 7,000 additional items.

“The outpouring of love and support in the wake of the disaster has been truly heartwarming,” said the captain. “Our thanks go out to all the first responders, volunteers, donors and everyone who’s played a part in the relief effort.” 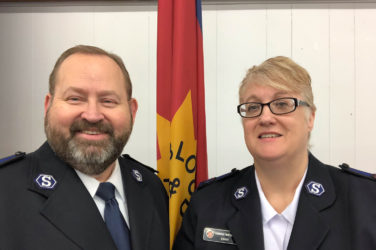 by Michelle DeRusha Envoys Joel and Ramona Arthur have a heart for ministry, which ... 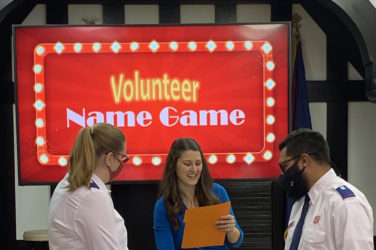 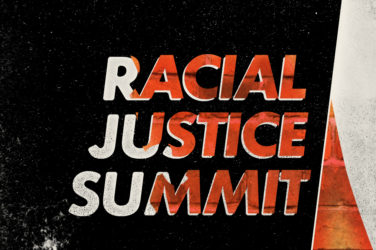