Michelle’s husband was the initial spark in what would become her passion to serve The Salvation Army and the Lord. He’d been involved on The Salvation Army Advisory Board for many years and would come home to share the good things the Army was doing. He was also from a strong, Christian background.

Michelle had always believed there was a higher power, but the prejudices she’d heard from some people who called themselves Christians largely turned her off church. Though not quite certain about serving with a Christian organization, she had a heart for her community, and the Army’s good work really struck her.

“I didn’t know everything they did, but I was amazed at what I did see,” Michelle recalled. “I started learning more about the auxiliary and started serving with them. I became really involved with coats for kids. Soon a neighbor asked if I wanted to visit the corps.”

The neighbor’s question got Michelle thinking about the Army’s church. She gave the corps a try. She liked it enough to return, and eventually, the Lord stirred in Michelle to open up a Bible.

“My faith had been in development for about eight years or so, but my relationship with Jesus jump-started when I opened up the Bible for my second attempt at reading it,” said Michelle. “During one sermon, it was mentioned that Jesus was quoted in red. That really piqued my interest because I felt it could give me a sort of ‘cliffs notes’ into the heart of Jesus.”

Instead of starting to read the Bible in Genesis, she read only what Jesus said.

“I was so relieved to realize that everything I’d ever hoped God to be (loving, compassionate, forgiving and everything good) was right there confirmed straight from the mouth of Jesus!” said Michelle. “Once I started reading the red, I couldn’t put the Bible down.”

Michelle accepted Christ as her savior. Since then God has been using fellow believers to strengthen Michelle’s relationship with God and increase her hunger for a deeper connection with Him. Majors Bob and Ruth Fay’s example of compassion, selflessness and love has encouraged her too.

“Michelle puts her faith into action and becomes Christ’s loving arms to all people,” said Ruth. “She and her family attend the corps and love that our mission is being lived out each week by loving all people. If there is a need, Michelle isn’t afraid to meet that need and be an agent of change in our corps and community.”

Recently God has also brought other mentors into Michelle’s life as she continues to pursue her relationship with the Lord and serve Him.

“I think God drew us to The Salvation Army because it truly seemed to be the church ‘Doing the Most Good.’ I think we stayed because of the lessons of love and humility the fellow members teach us through words and actions,” said Michelle.

On behalf of the Territorial Commander, Paul R. Seiler, we are very pleased to announce the following appointments effective June ...

Commissioner André Cox, a Swiss-British Salvation Army officer, has been elected as the 20th General of the Christian church and ... 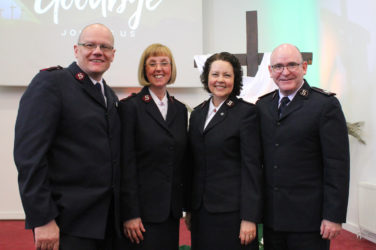 ‘WE will wait at the Cross, a hungry generation’ declared a slide on the screen during the playing of ‘At ...