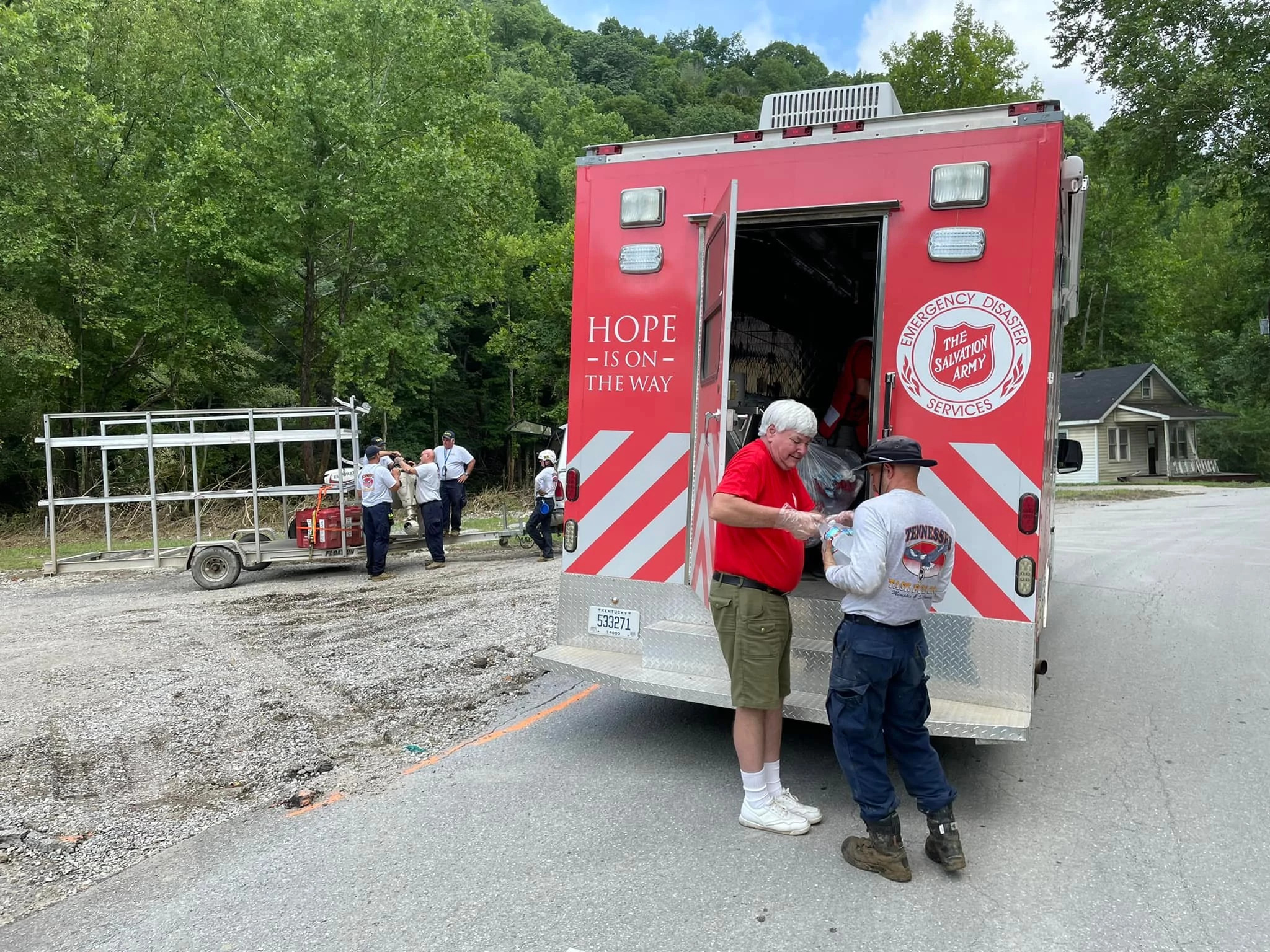 THE Salvation Army’s Emergency Disaster Services (EDS) in the USA Southern Territory are responding to catastrophic floods, landslides and mudslides in eastern Kentucky, caused by multiple rounds of severe thunderstorms on 27 July 2022. At least 37 people have died and hundreds of homes and businesses have been lost to the flash floods, with further rainfall anticipated for the region.

Several counties have been affected by the flooding and many roads have become impassible, with multiple mudslides making travel dangerous. Water systems and pumping stations have been negatively affected and, in some cases, people are either without water or have been advised to boil water. As well as limited water access, multiple regions are experiencing sporadic communications and network issues, leaving a number of people isolated.

In the immediate aftermath of the flooding, the Kentucky and Tennessee Division responded by delivering 500 clean-up kits – including mops, buckets, gloves and disinfectants – for distribution among relief workers and survivors in Langley, KY, and ensuring that three Salvation Army canteens were on standby. Since this initial response, under Divisional EDS Director Bo Sells, The Salvation Army has deployed those canteens in Richmond and Louisville, KY, and in Jackson, TN, as well as dispatching EDS response units to Danville and Madisonville, KY, and three roving facilitators to Hindman, Whitefield and Hazard, KY. The teams located at these bases are providing much-needed food and clean drinking water, as well as offering specialist emotional and spiritual care to first responders and survivors.

Speaking with The Weather Channel, Divisional Commander Major Thomas Louden said: ‘Our teams are encountering incredible devastation… The terrain is quite challenging. People have limited mobility right now, particularly where the floods have overtaken their homes and their modes of transportation and getting relief, such as The Salvation Army, to them is going to be a continued challenge.

‘It’s not just the property loss, it’s the loss of life, and that impacts everybody. The communities in eastern Kentucky are so close-knit… The loss of one life impacts most likely the entire community. The Salvation Army is trained in spiritual and emotional care, and we will be alongside our people in eastern Kentucky for as long as need be.’

On 29 July, US President Joe Biden declared a major disaster in the Commonwealth of Kentucky and ordered federal aid to supplement commonwealth and local recovery efforts. Swift water rescue teams and the Kentucky National Guard have been deployed for search and rescue missions.

As of 1 August, 20 volunteers/staff and five Salvation Army officers had provided 1,623 meals, 225 snacks, 24 hygiene kits and 375 instances of spiritual care.

Report by IHQ Communications, based on information provided by the Southern Territory

NAOC: equipping an Army for change

by Major Steve Merritt   The theme of this year’s National Advisory Organizations Conference ...

by Captain Heidi Reed, Wyandotte Downriver, Mich., corps officer When my husband and I ...

As part of The Salvation Army’s rebuilding efforts in Haiti after the horrific earthquake ...