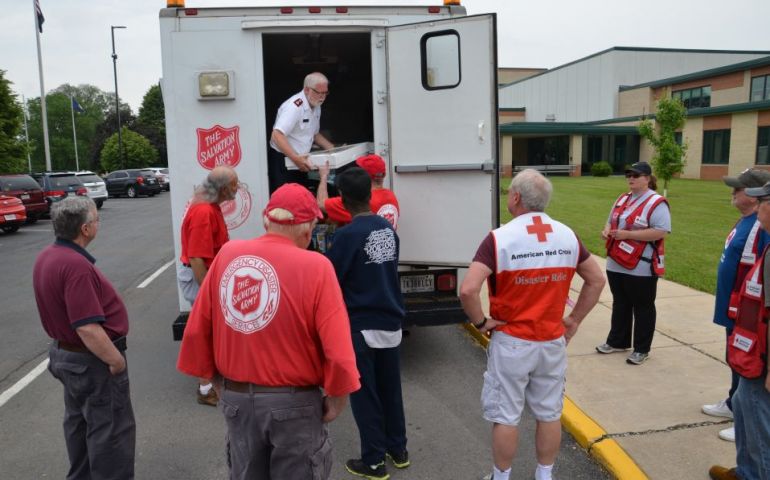 Pendleton, Indiana – The Salvation Army Indiana Division has activated two Emergency Disaster Services teams in Madison County in response to the Memorial Day tornado that swept through the city of Pendleton and town of Huntsville. Two fully-stocked canteens from Indianapolis and Muncie are currently deployed in the community, distributing water, Gatorade, snacks, and sack lunches and dinners to residents, first responders, utility crews, and the hundreds of volunteers who are assisting with clean up.

Monday’s EF-2 tornado cut through the centers of the two communities, uprooting one hundred-year-old trees and damaging hundreds of homes and businesses. Though property damage was extensive, only one minor injury was reported. Crews have been working around the clock since late Monday night and power had been restored to all but around 1,000 residences by mid-day Wednesday, with water service back on in most neighborhoods.

On Monday evening, a shelter was set up by Madison County COAD (Community Organizations Active in Disaster) at Pendleton Heights High School. Major Wolfe assisted at the shelter on Tuesday morning, helping to offer comfort of the residents staying there before starting food deliveries.”We’re working to comfort and assist all the families who were affected by the tornado and downed power lines,” said Major Wolfe as he prepared to go out for the first round of neighborhoods on Tuesday morning. “Today we’ll be providing hydration, snacks, and food. We’re praying that the power will be up again soon.”

The Salvation Army EDS canteens were set up at stationary locations at the Pendleton First United Methodist Church, Pendleton Christian Church, and the community’s heavily-damaged Falls Park. Canteens also made rounds in hard-hit Huntsville neighborhoods in order to bring food and hydration to homeowners and line workers in areas still closed off to vehicles.

Judith, a resident of Huntsville, offered some perspective on the experience. “We were lucky. I just lost my kitchen and some old trees,” she said, pointing to where her extended family was cutting up several fallen trees in the yard. “Up the road they lost so much more, but no one got hurt. It was really a miracle. You just don’t know how lucky you are until something like this happens. It’s a shame it takes a disaster to bring people together, but it does make you appreciate what you have.”

The Salvation Army also partnered with the Red Cross of Indiana to distribute sandwiches and water donated by a Walmart just up the road in Anderson. With four mobile units in the community, the two organizations were able to get to most residents in just a matter of hours. Majors Mike and Kathy Wolfe, of the Anderson Salvation Army, manned one canteen at the Volunteer Reception Center (VRC). This was set up by the Madison County EMA to organize all the volunteers needed to clear the hundreds of towering trees that came down in this “Tree City USA” community. Many volunteers are residents who were not in the direct path of the tornado and want to help in any way they can.

How you can help:

Stay up-to-date on the tornado response in Indiana by following @SAIndiana on Twitter and www.Facebook.com/EmergencyDisasterServicesIndiana. Additional information can be found at www.SalvationArmyIndiana.org and photos from Pendleton and Huntsville can be viewed on our Flickr page by clicking HERE.

by Marjorie Remy   In high school I received a letter about studying abroad. ...

(TAMPA, FL) In the wake of Hurricane Ida, The Salvation Army’s Florida Division has mobilized equipment and ...