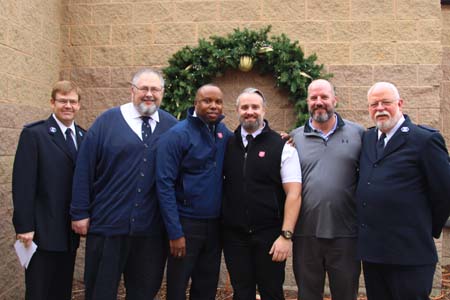 My journey to the cross began years before I understood its meaning. Coming from a non-Christian  background, my knowledge of Christ came from my grandmother occasionally taking me to Sunday school at a Presbyterian church. Unfortunately, I was too young to understand the messages of the stories. Then, when I was about 10, my sister and I were sent to an Episcopalian summer camp—a nice break from our neighborhood where life was scary and dark, where I felt fear and despair.

In the woods of Wisconsin, the camp was simple with particle-board cabins and no electricity or running water except in the lodge. I signed up for activities like horseback riding, archery, arts and crafts, nature walks and swimming. Each day I attended two worship services, one before breakfast and the other in the evening on the beach or by the campfire. I remember how excited I would get for the evening services because we sang songs and listened to the wind blowing through the trees. During those times I could feel another Presence, and it was good. It was completely opposite from  what I knew in my neighborhood. I was safe and loved.

Once a week after the evening service, the counselors would sponsor a Stations of the Cross tour  around the camp. We would be issued candles and travel a good distance to each station where we would learn about the life and ultimate sacrifice of Jesus Christ. I remember the glow of the candles and the warm feeling I associated with the Holy Spirit. I saw Jesus through the people at camp. However, when I turned 15, the days of camp were over, and so was my spiritual journey, or so it seemed.

After 20 years of drug abuse, sexual promiscuity, self-hate, addictive behaviors and insecurity, I would again rub shoulders with Christianity. I met Salvationists Ron Shoults and Ev Jordan, employees in the Central Territorial Headquarters information technology (IT) department. I felt the company I worked for could provide products and services for The Salvation Army and wanted their business. The more I pursued this opportunity with Ron and Ev, the more I saw patience, peace, love and mercy. I wanted what they had. No, I needed what they had in my life.

It took a couple of years,  but I finally was the territory’s “preferred” vendor. I developed relationships with other Army IT employees like Paul Phillips, Brian Allan and Alberto Rapley. But as business was picking up, my personal life was falling apart. I gravitated to these godly men who were willing to listen to me when I was blindsided by divorce. As the life I’d built around my wife and two kids disintegrated, these guys rallied around me, daily checking in on me and letting me know they were there for me.

During this time, Ron gave me a book he said was important to him. He said he would never ask me about it, but if I had any questions, he’d be glad to talk about it. One evening during a particularly difficult custody battle, I broke down. I could no longer fight these circumstances on my own. I scrambled to the attic, found the book and began reading it. It was Lee Strobel’s The Case for Christ. Through its words, the death and resurrection of Jesus was no longer a story too crazy to be true. I could see how research and evidence all pointed to a Creator and Messiah. I started attending the Oakbrook Terrace, Ill., Corps where Ron, Ev, Paul, Brian and Alberto worshipped. The intensity of my journey to the cross was increasing.

Over time and involvement in activities with the Army and study in God’s Word, I have come to the conclusion that a man named Jesus Christ was born, lived a holy life and for three years ministered to people doing great miracles. He claimed He was the Son of God, and I believe He is. This Man knew how His death would change the world and at the appointed time, He would have the world’s past, present and future sins heaped upon Him as He hung on the cross.

I sometimes imagine sitting with Christ in the Garden of Gethsemane. It’s recorded He prayed with such deep sorrow and agony that He sweat drops of blood. I want to put my arm around His shoulder. I want to comfort Him like the people of my corps comforted me and stood beside me.

The reality is Jesus was beaten to a point where He was unrecognizable, probably whipped until his spine was exposed and then nailed naked to a cross. Not only that, He suffered the wrath of God for my sin. He willingly endured this horrific death because I am a sinner and His death on the cross was the only way to reconcile me to God the Father and give me eternal life in heaven with God. It is a debt I could not pay. He did all of this and only asked me to repent and believe in Him. I believe Jesus Christ died for me. I believe all of my sins have been nailed to that cross; they are paid in full.

Editor’s note: In addition to attending worship at the Oakbrook Terrace Corps, David now conducts an AA class at the Waukegan, Ill., Adult Rehabilitation Center, inviting the men to come to the corps with him. This past summer he was part of the corps’ mission team to the Bahamas. 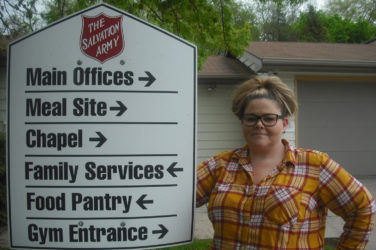 A note of gratitude 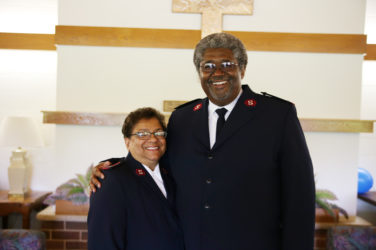 A Conversation with Major Steve Harper

With the Racial Justice Summit around the corner, we are honored that Major Steve Harper, one of the territory’s first ...