GRIFFIN, GA (January 19, 2022) – Griffin, Georgia is a moderate sized city of 23,000 residents that sits in the Atlanta Metropolitan Area a little more than an hour southward on Highway 19. It is also the county seat of Spalding County. Griffin is close enough to Atlanta to take in the advantages of a big city, but far enough away to provide a quieter life for those who want to avert big-city challenges. One of its claims to notoriety is that it is the birthplace of the infamous Doc Holliday of western lore. 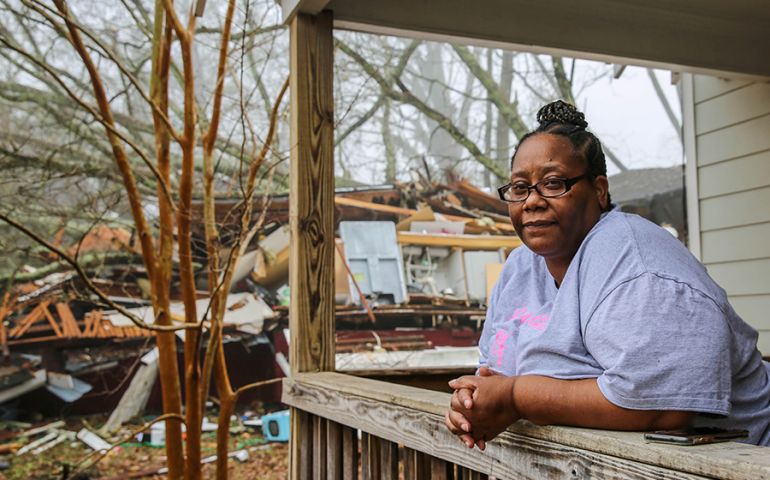 For LaQuita Troutman, life on Cherry Street in Griffin was about as happy and idyllic as it could be on a street with such a cheery name…until it wasn’t.

“About 4:30 in the afternoon I was sitting at my dining room table and saw the sky go dark and the wind started howling,” says LaQuita. “My daughter was standing on the front porch, so I told her to get in the house.”

What happened next was something LaQuita never imagined could happen to her or her neighbors. “It got so dark and cloudy you couldn’t see anything. Things started picking up off the ground and being pushed around and knocking against the house,” LaQuita said, “I thought it was going to come through my front window, so I ran to the back of the house.”

A series of tornadoes that wreaked havoc in Alabama had made their way eastward into Georgia and to Griffin where they were about to unleash their fury in LaQuinta’s neighborhood. “The back door of the house has three locks, but the wind pushed the door open, and water and tree branches were coming through the doorway,” exclaimed LaQuita. “My daughter grabbed me, and we huddled in the closet.”

The tornadic winds then collapsed a 100-year-old tree next to LaQuita’s house on top of her neighbor’s home ripping it open and flattening it to the ground. “When we came out, we heard hollering from the front of our house and by the time we got there we saw our neighbor with her two kids coming around from the side of the house,” remarked LaQuita. “They did not have any shoes, no coats – nothing, so we brought them into our house until everything was over.”

“We are counting our blessing that everyone is OK,” says LaQuinta.

LaQuita’s neighbor had to crawl out of a window to escape their now crumpled home. However, after the storm passed, they could smell the gas seeping from the remains of the house so LaQuita, her daughter and her neighbors evacuated the area to LaQuita’s mom’s house down the street.

“We are so thankful for The Salvation Army – they have been out here all over the place helping people from day one,” says LaQuita. “We never thought something like this would happen to us, so we are extremely grateful for what you are doing to help us all out.”

Across Georgia for over 130 years, the essential mission of The Salvation Army has been simply to touch human lives at the point of greatest need. It may be a child needing guidance, a life needing hope, or a community needing help in the times of disaster. The storms may be natural, or they may be personal. But regardless of the source, scale, or scope of human tragedy, The Salvation Army’s goal remains the same: serving the most people, meeting the most needs, and doing the most good.

There is still much repairing and restoring to do in Griffin, and that will take some time. The good news is that The Salvation Army will be there for as long as it is needed. With the generous support of communities, The Salvation Army can meet immediate and other needs during disaster responses. The best way to help those impacted by the recent Georgia tornadoes is to make a financial contribution. Financial contributions allow disaster responders to meet the specific needs of those impacted.

What is Bible Correspondence?

by Melody Rosa   The Bible Correspondence program is one of several services offered ...

Bravo to a great festival!

The music of our lives: the harmonies and dissonance, the rhythms and themes, the ...