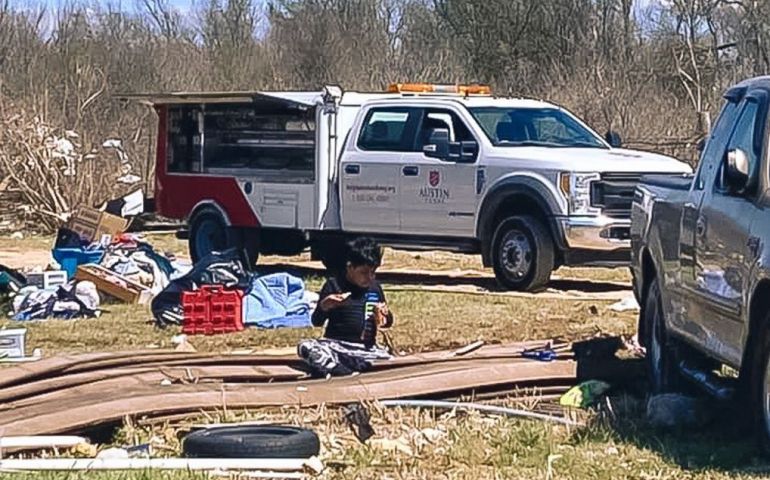 According to Alvin Migues, The Salvation Army Emergency Disaster Services (EDS) Director in Texas, “We have response teams operating in Taylor, Elgin, and Round Rock after storms and tornadoes impacted the area. We are continuing to assess any community needs in East Texas and other areas. This is in addition to the current deployment of equipment and personnel at several wildfires in and around Eastland County where we have a field kitchen and are providing meals, snacks, and hydration to firefighters, first responders, and impacted residents.”

One of the strengths of The Salvation Army structure and response in times of disaster is that the organization already has a presence in every zip code in Texas. Through church and community centers, Service Centers, and volunteer-ran Service Units, The Salvation Army can quickly mobilize staff, volunteers, and equipment, and be at a disaster site often within the first few hours of response.

“The Salvation Army has the ability to react and respond immediately after a disaster thanks to teams of staff and volunteers who are trained and ready to serve, long before a fire, a tornado, or any other disaster strikes,” said Migues. “We encourage our community members to get involved now and learn more about joining our disaster service teams.” Learn more about volunteering at www.Disaster.SalvationArmyUSA.org

Majors Alfonso & Adrianna Martinez, Salvation Army Officers in Austin, loaded up their Rapid Response Unit, a specially designed food service vehicle used for disaster response, and headed out into affected communities on Tuesday morning. “We visited Taylor and Elgin, just east of Austin where a tornado touched down on Monday night,” said Major Alfonso Martinez. “One area we visited in Elgin was hit particularly bad. Several homes were destroyed, others had lost their roofs, and trees were down and covered the street. We spent some time with three families who lived very close together and had lost everything. They were living in one mobile home while building two additional homes. They had just put in new appliances and the tornado destroyed everything.”

The Martinez’s provided a meal, snacks, and drinks to the families. “They were understandably traumatized by the experience but were pleased to have someone to talk to and listen to their story,” said Major Adrianna Martinez. “We were privileged to spend some time with the families and pray with them.”

Service continued Wednesday as staff and volunteers from Austin and the Taylor Service Unit coordinate practical assistance to those affected.

Meanwhile, The Salvation Amy continues to support the efforts of firefighters and first responders battling wildfires in Central Texas. So far, more than 150 structures are reported destroyed, at least 50 homes, and more than 70,000 acres burned.

“We are providing meals to firefighter, first responders, and affected families and working to support evacuee shelters in the area,” said Migues. “We will work with our partners to provide assistance as we move into the recovery stage in the coming days. The first step, after immediate assistance and as part of the case management process, is to help homeowners navigate the claims process as well as coordinate recovery efforts to maximize the funds that may be available for assistance.”

For updated disaster response information or to donate, go to www.disaster.salvationarmyusa.org or call 1-800-SAL-ARMY. Watch for regular updates on our social media pages at www.facebook.com/salvationarmytexas/ and www.twitter.com/salarmytx

(September 17, 2020) As evacuation orders begin to lift, The Salvation Army continues to serve ...