A Great Opportunity to Serve

PAUL Rajkumar, Director of Community Empowerment Projects and Health Development in The Salvation Army’s India Central Territory, explained to Jo Clark (Programme Resources Department, International Headquarters) how the territory’s COVID-19 response has benefitted many vulnerable people while also showing the local authorities how The Salvation Army can work in local communities to provide assistance and information:

I am a lifelong Salvationist and a soldier at Bapatla Central Corps (Salvation Army church) in the India Central Territory. I live in Bapatla with my wife, who is a bank worker. Our two sons currently live in London and Hyderabad respectively.

I expressed an interest to serve the Army when I was approached by the territorial leadership in June 2019. Since then I have had the privilege of utilising my training, skills and previous work experience within the corporate and social development sector, and with the state government.

Here in India there was a strict implementation from the end of March of lockdown to control the spread of COVID-19. However, quite unexpectedly, I and another volunteer travelled almost 4,000 kilometres in the first six weeks!

I drove these distances to distribute protective and printed materials to Salvation Army corps and also to monitor the distribution of food items to vulnerable individuals and families. The protective materials, consisting of washable face masks, gloves and hand sanitisers, have also been given to police who are out on the highways enforcing the lockdown, and to street sanitation workers who are continuously cleaning and disinfecting roads in order to reduce the spread of coronavirus.

The Salvation Army is the only organisation to come forward to help protect people who are trying to manage our public health and safety. The government gratefully acknowledged our efforts by giving official permission for me to travel within the states covered by the India Central Territory. I have been able to travel freely throughout Andhra Pradesh, including the government-designated Red Zones, and in northern Tamil Nadu.

The first phase of our ‘Protect Self and Fight Corona’ campaign was quite visible in the communities. We held street plays and skits in public places to raise awareness of the virus and to educate about precautionary measures which everyone could take. We printed and distributed Telugu and Tamil language information leaflets and posters and also shared these with local and state-level authorities, police officers and the Red Cross.

With the full cooperation and support of the police, we pasted health advice posters along the main roads and on the walls of marketplaces. Some of the police even stuck the posters on their vehicles and were so excited that they called district media to cover the story!

Following the second-phase message to ‘Stay Home and Save Lives’, and the announcement of lockdown, we headed to the highways where we encountered migrant labourers from other states like Bihar and Chhattisgarh trying desperately to get back to their families.

After building confidence with people along the highway that we were not the police, we spoke with them to find out their situation, how they were doing and where they were heading. Alongside providing protective materials (such as gloves, hand sanitisers and face masks) we were able to support these vulnerable people on the road with nutritious food – boiled eggs, bananas, curd items, biscuits and water – to sustain them throughout their journey that day.

Over the time of lockdown, we have also been able to provide the same support for migrant workers who were stranded in government-organised quarantine relief centres, to other vulnerable individuals (truckers, ragpickers, health and sanitation workers and members of the transgender community) and to families in the communities served by our corps.

On 1 June I was engaged by the local district administrative authorities to act as a translator for migrant workers and their families in a new relief camp, where they are tested for COVID-19 and provided with medicine. I appreciated the great opportunity to counsel and comfort workers from Uttar Pradesh, Madhya Pradesh, Bihar, Jharkhand, Chhattisgarh, West Bengal and Odisha, speaking with them in Hindi, which I learned while working in Delhi for 12 years.

Many people have commented that the refreshments we provide, which they can eat gradually throughout the day, are preferable to a one-off meal which would only keep them satisfied for an hour or two. Where it was more appropriate, though, we served 400 migrant workers from northern India with hot cooked food in three different centres in Chennai for 48 days from 1 April.

Washable face masks – stitched initially by the territorial headquarters Women’s Ministries team and some community women in corps, under the leadership of Territorial President of Women’s Ministries (TPWM) Commissioner Prema Wilfred – have been well received by all sections of people, particularly the police and by sanitation workers who can be on duty for many hours, longer than disposable masks can be used for.

The masks became in demand by other government department workers, so much so that production expanded to include officers and soldiers in some of the divisions and members of our Community Empowerment Programme self-help groups (SHGs). We also sourced masks from commercial companies.

Purchasing sewn face masks from SHG members at the same price that we pay other production companies is proving to be a really effective way to help SHG members support themselves, their families and communities, particularly in areas where people live hand-to-mouth from daily waged labour or live with the impacts of leprosy. As at mid-May, SHG members and women’s ministries members had sewn around 4,000 of the 26,000 masks which we distributed.

Although I had connections with the government before, this COVID-19 response period has given me the opportunity to explain more to the government about what The Salvation Army is and how it can support their efforts.

The government is realising our ‘reach’ and that, through our local presence and networks, we can connect with many of those whom the authorities are unable to reach. Because of this – and backed up by Territorial Commander (TC) Commissioner Wilfred Varughese giving assurance to the government that all Salvation Army officers and soldiers will uphold all government rules and regulations regarding social distancing and wearing masks – we have been given support and the freedom to move around in our mission to support the most vulnerable.

Government personnel have also helped with the coordination of logistics associated with our awareness-raising campaigns and community-level distributions in areas where it was complicated to maintain social distancing. Our relationship with the government has dramatically improved during these weeks and they are giving high recognition to our efforts.

I have been impressed at how the officers, soldiers and young people of our territory have really stepped up during this time. People have put any self-interest aside to support me whenever I have visited corps or communities, receiving me openly with hospitality and helping with any house-to-house food distributions.

The project funding we received from International Headquarters has inspired our soldiers and officers to contribute whatever they can at a local level. Our territorial leaders too have been leading by example. Seeing videos of our TPWM, other women officers and community women stitching masks, day and night, has stirred others to take up the challenge and the TC has been communicating and motivating us daily, connecting with us and inspiring us to each play our part.

Through the humility of such ‘leadership by example’ I can see a paradigm shift occurring in the mindset of Salvationists and friends.

Although the travel and the food, face mask and sanitary item collection and distribution have been hot, long and hard work, often on rough roads, I am quite used to such levels of intense travel from my previous work with other international non-governmental organisations whilst responding to floods and other emergencies, so I have viewed this as a great opportunity to serve.

‘Reaching the unreached and serving the community’ is my life passion; each day during this lockdown I simply remember how it would be to step into the shoes of the people we are helping, and this keeps me moving forwards. With restrictions only being eased gradually, we will continue our mission to identify and support the people who remain particularly vulnerable in these days. 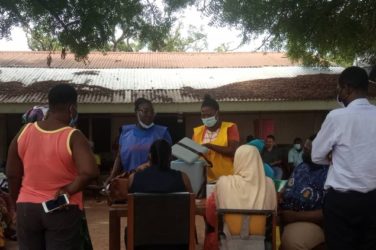 THE Salvation Army’s Urban Aid Clinic in Accra, Ghana, has been working with other health agencies in the west African ... 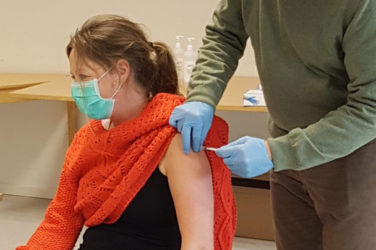 THE Salvation Army’s community centre in Aalborg, Denmark, has been a hub for administering COVID-19 vaccine to homeless and other ... 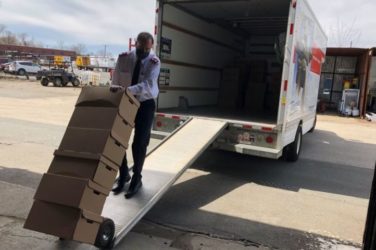 Hartford, CT Hub is Humming Along

HARTFORD, CT – Bolstered by a delivery from Foodshare this week, The Salvation Army’s Hartford Hub is humming along, providing ...