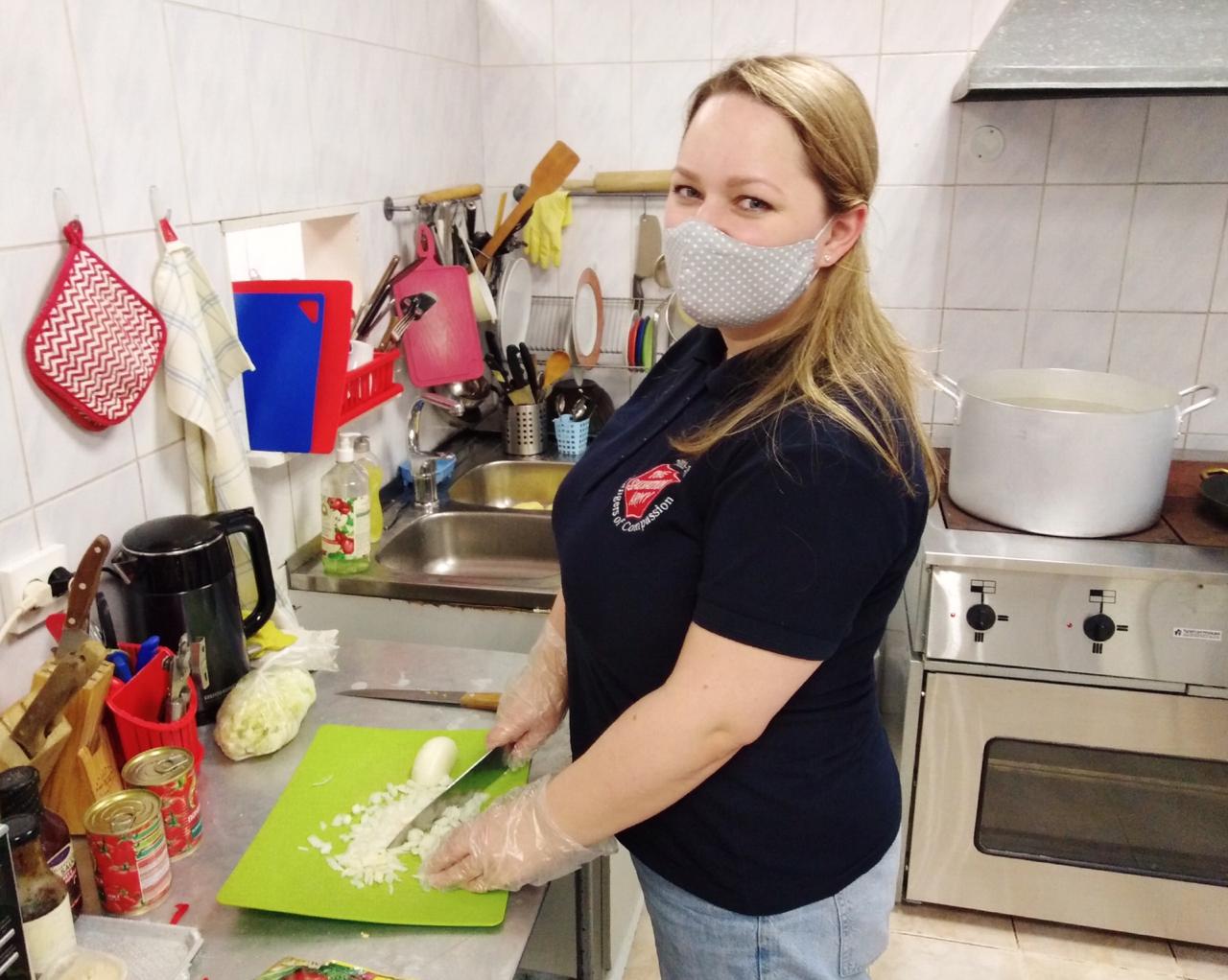 MY husband and I have been Salvation Army officers (ministers) for just eight months. We were commissioned in the summer of 2019 and were appointed as corps officers (church leaders) in St Petersburg. We came enthusiastically into this beautiful city; we were full of dreams and plans. It has turned out to be the most challenging year of my life!

When we arrived here everything was new for us, and we threw ourselves into arranging the schedule for the spiritual and social programmes, including a feeding programme for vulnerable people and anti-human trafficking work. We had lots of plans for these programmes and then the virus came. Everything we had built depended upon physical human connection. We felt like we had to start all over again!

The first week of self-isolation was really hard; we didn’t know what we could and couldn’t do. No one understood the rules, even those who had been working in social programmes for many years. However, the toughest thing was feeling like we had left people without our assistance at a time when they needed it and we wanted to help.

New restrictions came from the government every day. One of the first was that people were not allowed to visit bars or churches. (Although this might seem strange, in times when people want to release stress they do tend to choose either alcohol or church!) So, our centre was closed for visitors from 28 March. From this day onwards we had to start looking for new ways to serve God and meet the needs of the people.

Our church congregational programmes were the more straightforward; women’s ministry, men’s ministry, Sunday worship and Bible study all went online. This took some getting used to – preaching to a computer screen rather than to a congregation whom you would be able to ‘feel’ as they react to your words; women’s ministry members adjusting to feeling comfortable to chat and share in a virtual Zoom ‘room’ – but most people are now online and on social media and willing to try and learn new things. Those for whom this is just not possible are kept in touch with via phone calls and deliveries of printed-out materials to their homes.

After a short time, we also started to release Sunday school lessons each week online. Our six-year-old daughter, at home because she was unable to attend kindergarten, was the inspiration for us in this. My husband used to work as a designer and I have been learning to edit videos, so between us we have managed to produce something new to serve the 15-or-so children in our corps. In fact, these materials we have now shared online, and they are being used by children in other corps across The Salvation Army’s Russia Command. This has been a real encouragement because it has enabled us to feel more like we are one team. We have shared of our gifts and efforts and other officers have been able to help in different ways.

Our social ministry, however, presented much more of a challenge since this couldn’t just go online. So we had to search for different ways to help those who are the most vulnerable.

We discovered that there are lots of unemployed migrants who became stuck here when the Russian borders closed and are unable to find any daily labour work. All are facing huge debts and rent arrears. These people are scared and desperate. Another group of people who have felt the influence of COVID-19 most strongly are the homeless, since many of the programmes from which they received food, clothes and shelter are not able to operate and there is little opportunity to earn any money.

So, we started by contacting the city state administration to talk about these groups and to see if we could help in any way. They were very open to cooperate with us. We were surprised! They explained that, while the government helps many people, some groups (such as those we had identified) fall outside of traditional government protection schemes, so we were given official authorisation and were asked to help these people in need.

Our command applied to International Headquarters for some project funding so we could begin to distribute bags of essential food and sanitary items from the beginning of April. We received a list from the government of people in need who had contacted them for help but fell outside of the official protection programmes.

Working with our soldiers (Salvation Army members) and volunteers, we have managed to prepare and distribute food and sanitary items throughout the past month. In the same way, we have also been able to cooperate, through the Volunteers’ Headquarters, with a huge non-governmental organisation (NGO) to support vulnerable seniors. One man we helped has reached 101 years of age!

Each week we also try, using locally-raised funds, to prepare up to 10 additional bags of food and sanitary items, so we are able to support other people who are in need but do not appear on the lists of either the government or the NGO. During Easter we were also able to crowdfund to add some chocolate eggs and special Easter cake to the bags that went to families with children. These little luxuries brought so much joy!

Still, however, we were concerned for the homeless people in our area, who had been coming to our canteen to eat before the lockdown. We asked the city state administration if we could have permission to re-open. They didn’t grant this permission but rather asked us to help with a shelter which they, the state, had opened to provide full-time self-quarantine for homeless people in lockdown.

Before lockdown this shelter was used to house people overnight but had never been intended as a place which would provide food. The state asked us if we could help so now, along with preparing food to distribute, we also cook up huge pots of soup to feed people staying at the government-run shelter.

A well-known, high quality, bakery chain in the city has also offered its help. At the end of each day, since shops have been able to open for takeaway, we have collected leftover products for distribution to homeless people in the shelter (and to include in our food packages if there is enough). It is so good to have this cooperation and to be able to share such good quality bakery items with some of the most vulnerable people in our community.

At the start of May came a new government decree that every person in St Petersburg must now wear a face mask in public places (before it was simply advisable). Of course, these are almost impossible to buy and, if they can be found, are very expensive. Anticipating this, in recent weeks, our women’s ministry members had started to sew reusable cotton face masks. At the moment we have around six women sewing. We are not able to work particularly fast or to produce great numbers, but there will be enough for our families and for those who are the most in need and not able to make or source their own.

These past few weeks have been incredibly difficult in so many ways, and even now we have no information as to when this lockdown might end, but – in spite of these difficulties – I have come to love this time.

Firstly, I love how people want to cooperate with us, even the government. Secondly, I also love how people have been open to receive spiritual help. People have made contact with us having found our details in the War Cry magazine and online on social media (through VK.com – a Russian equivalent to Facebook), asking for prayer, and participating in online worship, teaching and group Bible studies. People are searching for spiritual food alongside physical food.

Thirdly, I love the way in which our motto ‘soup, soap and salvation’ is really being put into action, as we distribute the first two and have opportunity to talk with people about salvation every single day!

I believe that this time will pass; we will get back to our previous work rhythm, the unemployed will find new jobs and borders will open. But I also believe that the seeds we are planting just now will bear fruit. This gives us inspiration. This is our time for action!

When I think back to that first week of lockdown when we were shocked and sought God, I can now see how God has opened doors that we didn’t even expect could be opened! 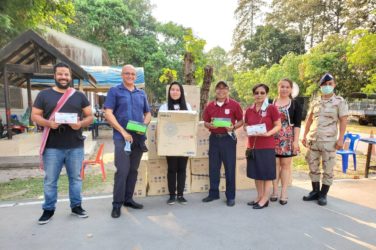 AROUND the world, The Salvation Army continues to respond to human needs resulting from the COVID-19 pandemic. The nature of ... 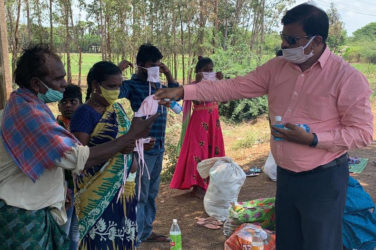 A Great Opportunity to Serve PAUL Rajkumar, Director of Community Empowerment Projects and Health Development in The Salvation Army’s India ... 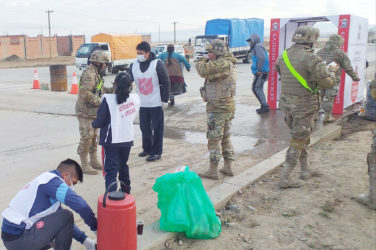 Coronavirus Pandemic: The Salvation Army ‘There for Those Who Have No One to Turn To’

IN almost all of the 131 countries where The Salvation Army operates, emergency responses to the COVID-19 pandemic are underway ...