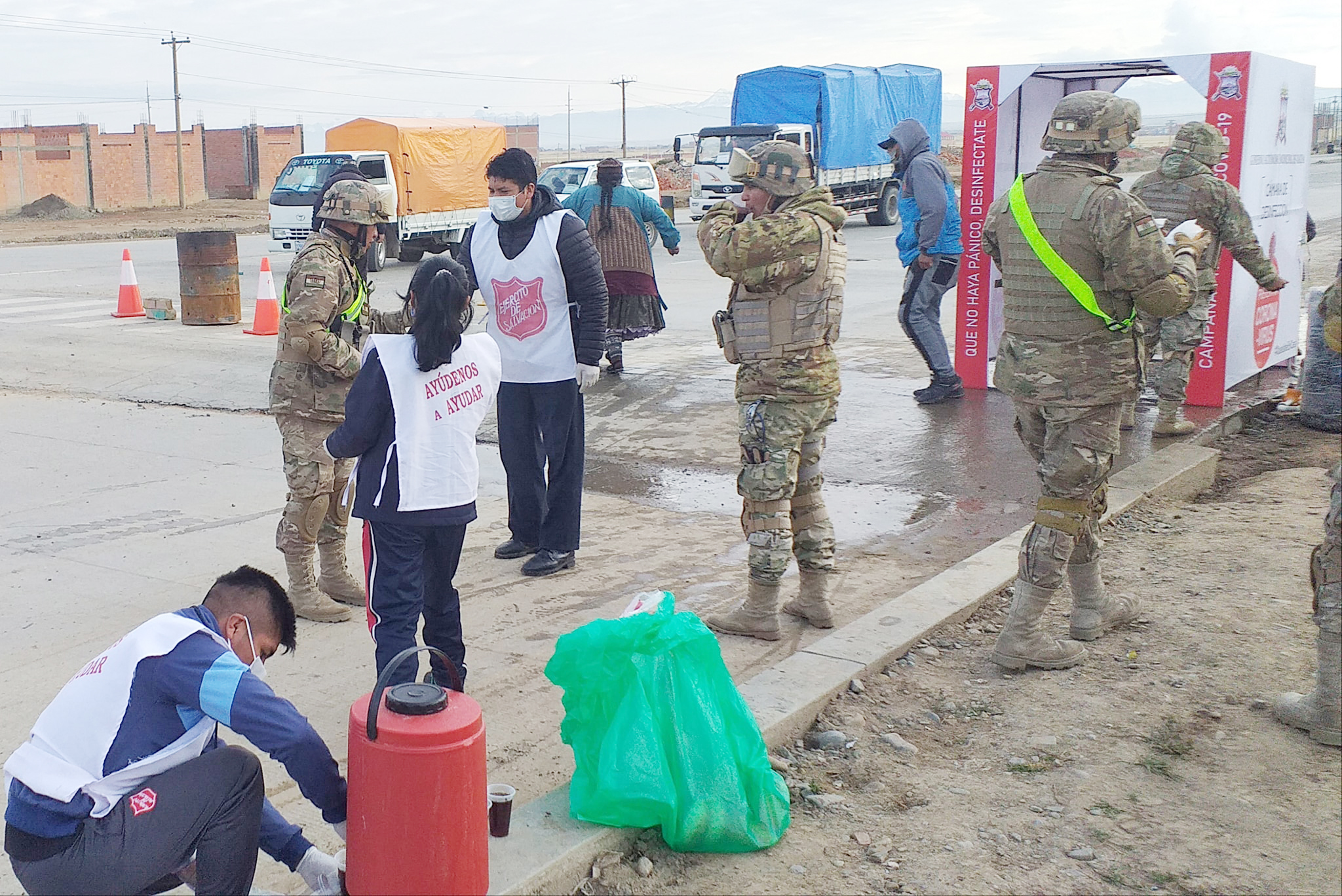 In Conakry, the capital city of Guinea*, The Salvation Army is working closely with the Ministry of Health and Sanitation, the World Health Organization (WHO) and other stakeholders. A public health awareness campaign – incorporating leaflets and large banners – is underscoring the importance of handwashing. The Salvation Army is also concerned about 10 specific communities in Conakry where the government curfew is affecting people’s access to food. Around 1,500 people will therefore receive emergency food packages in order to mitigate the risk of starvation. Handwashing materials will also be supplied, in support of the public health messaging.

Over the border in neighbouring Sierra Leone, The Salvation Army ­– again in collaboration with the WHO – is assisting communities in Freetown, Bo and Kenema. Here, the focus is on the provision of soap, sanitiser and cleaning materials, as well as personal protective equipment (PPE) such as gloves, masks and face shields. Food security in these locations is also considered to be problematic, and distributions of rice, oil and tinned fish are planned. Approximately 2,800 individuals will be helped through this initiative.

Food security is also a significant issue in Zambia, where many people are struggling to access supplies reliably and are unable to earn sufficient income to meet their daily needs. In 16 locations, in consultation with village elders, The Salvation Army is planning to provide more than 10,000 individuals with maize meal. The distributions will be carried out door-to-door, to prevent social gathering. Health advice will also be shared, to raise awareness of COVID-19 countermeasures.

Three locations in Bolivia have been identified as requiring Salvation Army assistance. In Viacha ­– a city of 10,000 inhabitants with 45 per cent living in poverty and 25 per cent living in extreme poverty – the COVID-19 crisis means that people reliant on the gig economy now have no income at all because they are unable to leave their homes. A two-week feeding programme seeks to address this, with The Salvation Army working in collaboration with the local government who will provide sanitiser and cleaning materials. Meanwhile, hot meals will be provided five days a week to 100 of the most vulnerable people in Villa Cosmos, for an initial period of one month. In La Paz, a similar scheme will operate for three days a week.

In San José, Costa Rica, The Salvation Army is concerned about the welfare of more than 3,000 people living on the capital’s streets, who are not receiving assistance from anywhere else. A daily feeding programme is being established through the organisation’s Refugio de Esperanza and an emergency canteen. Volunteers have been identified to help prepare the hot meals, adhering to all prevailing government health protocols. Wherever possible, the food will be served in biodegradable containers, in order to minimise the effect on the environment.

In Ecuador and Peru, The Salvation Army is working with the United Nations refugee agency (UNHCR), the International Organization for Migration (IOM) and the UN Office for the Coordination of Humanitarian Affairs (OCHA), to ensure that needs are met in a holistic way.

The mountain community of El Rancho, Ecuador, has been deemed very susceptible to the spread of disease. The Salvation Army is mounting a COVID-19 awareness campaign as well as distributing hygiene supplies to some of the most vulnerable people in the locality.

Venezuelans who – due to the situation in their own country – have arrived in Peru in the hope of building a better life for themselves, are finding the situation complicated. Ninety per cent of migrants work in the informal sector without contracts. Because of the national quarantine, they are currently unable to leave their homes and, in many cases, have not eaten for several days. Around 560 families in San Martín, Ica, Tacna and Trujillo have been identified as being in particular need, and are now being supplied with emergency food parcels once a month.

Following detailed liaison with local government and health officials, The Salvation Army in Thessaloniki, Greece, has determined gaps in the service delivery. In response, 300 medical supplies packages are being put together in order to better resource the local healthcare system – equipment such as masks, gloves and sanitising fluid is being assembled. Care packages are also being put together for vulnerable families, with essential supplies such as rice, cereals and long-life milk being distributed. Hand sanitiser is also provided in these packages, as are nappies (diapers) and wet wipes for families with young children.

The Salvation Army in Italy continues to provide food to around 700 people each week, with enhanced protective measures to safeguard both staff and service users. In the capital, Rome, The Salvation Army’s corps (church) has become a mask distribution site for the local government. Meanwhile, in Brienza, the movement has partnered with the Civil Protection Agency in order to assist with the delivery of essential grocery and pharmaceutical items. A further 1,100 people connected with The Salvation Army’s social services in the country are expected to benefit from an additional food distribution programme, making basic provisions such as pasta, oil and vegetables available.

In Portugal, contingency plans have been developed to extend The Salvation Army’s provision in order to meet growing needs. In Xabregas, near Lisbon, a night shelter has been expanded to become a 24-hour operation, in order to protect the service users by enabling better social distancing. The movement has also had to contend with providing a service while its own workers have had to self-isolate. In Porto, the existing feeding programme has been provided ‘at home’, despite having fewer team members available. Staffing issues have also affected The Salvation Army’s nursing home ‘Las Marinal’, though provision has been maintained and residents have been enjoying a varied programme of activities.

Distances are huge in Russia, where nearly 9,500 kilometres separate St Petersburg in the west from Vladivostok in the east. The Salvation Army is rising to the logistical challenge of supporting 1,400 families – equating to more than 5,600 individuals – known to be in particular need. In the following three months, food parcels consisting of bread, sugar, porridge, buckwheat, milk and cooking oil will be distributed from 12 locations across the country. Recipients will be verified by local authorities. A further 1,400 parcels will ensure the most vulnerable people have access to hygiene materials such as soap, sanitiser and toilet paper.

More than 10,000 vulnerable beneficiaries will receive emergency food supplies from The Salvation Army in Bangladesh. Part of the international non-governmental organisations hub in the country, The Salvation Army has already been meeting needs in several locations – particularly in the capital, Dhaka. Salvation Army leadership teams have now additionally received a direct request from local authorities to ‘help and protect’ women working in the sex trade in Jashore.

The packages include a 5kg sack of rice, along with dhal, oil and salt. Soap and handwashing instructions are also included. Additional supplies of PPE are also being sought for Salvation Army clinic staff in the country. As well as this, food will be provided for tuberculosis and leprosy patients receiving treatment at The Salvation Army’s Mirpur Clinic and to other vulnerable people attending the clinic in Andulia.

India remains on a national lockdown, which presents significant challenges for many poor families and individuals who do not have ready access to vital food supplies. From Kerala in the southwest to Kolkata in the northeast, The Salvation Army is responding to the COVID-19 crisis in numerous practical ways. Much of the response is being undertaken on a local, community level – for instance, in each of the 15 divisions and districts of The Salvation Army’s India Central Territory, 150 vulnerable people a day are being supported with the provision of food, snacks and drinks.

From The Salvation Army’s Catherine Booth Hospital in Nagercoil, in the south of the country, suffering is being alleviated by a strategic distribution of sanitary supplies and medicines to patients suffering from health issues such as diabetes and hypertension. The project also seeks to stave off hunger for around 35,000 individuals in the catchment area through the managed distribution of emergency food rations.

In the west, 700 families – especially those living in Mumbai’s slums – are being provided with food and hygiene supplies. Individuals in Ahmednagar, Pune, Sangli, Shevgaon and Pathardi are also being supported during this time when employment is an unrealistic proposition for many.

Meanwhile, in Pakistan, The Salvation Army has been one of the lead humanitarian agencies in responding to previous floods and earthquakes. It is now working in collaboration with the government and local authorities to support approximately 6,000 people in Sahiwal, Khanewal, Karachi and Hyderabad who are considered to be at particular risk because of the effects of coronavirus. Food and hygiene items, such as soap and Dettol sanitiser, are being distributed.

The Salvation Army in Australia is committed to maintaining essential services through this crisis. Adaptations to its provision include working with hotels to ensure that safe places can be made available to vulnerable Australians. Food distribution is being continued on a takeaway basis. In Victoria, Café Agape, run by Wyndham City Corps (church), has partnered with Second Bite to produce care packages that include fresh fruit and vegetables as well as other staples. Meanwhile, in Hobsons Bay, a Salvation Army outreach team is delivering meals to vulnerable members of the community who would ordinarily congregate at the organisation’s soup van.

Local Salvation Army centres are also putting together We Care packs to express support for their community in these testing times. The packs vary from location to location, but the sentiment is the same – to assure people who are finding it tough that they are not alone and that The Salvation Army is there for them.

Provision of PPE and hygiene supplies have been a priority for The Salvation Army in Korea as it undertakes emergency relief activities. Vulnerable groups in Gyeongbuk and Daegu received early shipments of masks and sanitiser, with 18,500 masks and nearly 6,000 bottles of hand sanitiser liquid distributed in these communities. In Namdaemun and Donui-dong, 800 lunch boxes are being distributed to residents who are finding it hard to source even one meal a day.

In New Zealand, people facing financial hardship at this time of uncertainty and economic disruption can contact The Salvation Army’s community finance team via phone or Skype. ‘We are acutely aware that people in debt may be extremely concerned about repaying loans at this time,’ says Assistant Territorial Secretary for Mission, Captain Gerry Walker. ‘The key message is that New Zealanders need to help each other as much as they are able, at this time,’ he continues. ‘The Salvation Army is there for those who have no one to turn to.’ 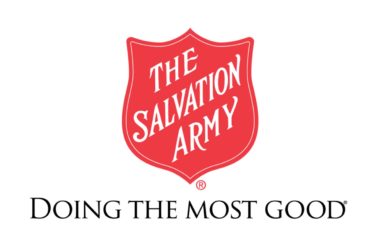 UPDATE: The Salvation Army Harbor Light Shelter to be Used as an Emergency Quarantine Center 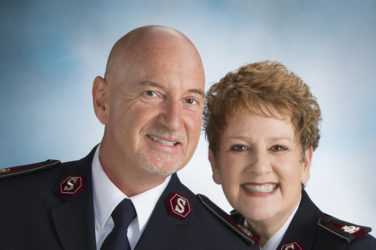 A Word of Encouragement in Light of COVID-19

Here’s a message from our Territorial Leaders, Commissioners Heidi and Brad Bailey. 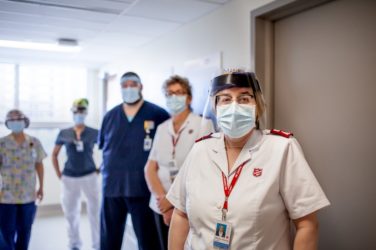 AS a Christian movement, spiritual care is central to the mission of The Salvation ...