Salvation Army teams in Indonesia have been responding to New Year floods around the capital city, Jakarta, that killed at least 43 people and led to more than 190,000 being evacuated.

Meals and hot drinks were provided to people from badly-affected communities in the Jelambar and Kampung Melayu areas. Young people from Jelambar Corps (Salvation Army church) helped with the evacuation and food distribution.

Response teams were put together of Salvationists from corps across Jakarta (Jakarta 1, Jakarta 2, Polonia, Jelambar and Depok) and cadets from The Salvation Army training college. The territory’s medical services also provided assistance, in cooperation with the Indonesian Christian Association for Health Services.

In the four days of the initial response, 1,939 meals and hot drinks were served in Jelambar, all from of the public kitchen at the training college in Jakarta. Medical services were provided to 154 people, and four were evacuated to a safe place.

Conditions are now improving and the government has taken over the recovery phase, but further rain has been forecast so the team at Jelambar is monitoring conditions and will remain on standby.

Nonprofit has served at least 6,000 meals to evacuees in just a week since the fire began What:   The Salvation Army ... 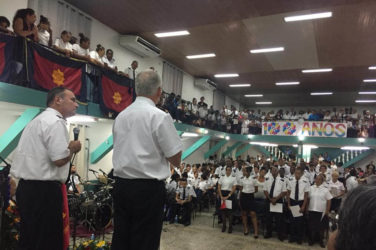 Centenary celebrations for The Salvation Army in Cuba included the enrollment of 100 new soldiers, a fitting testament to the ...