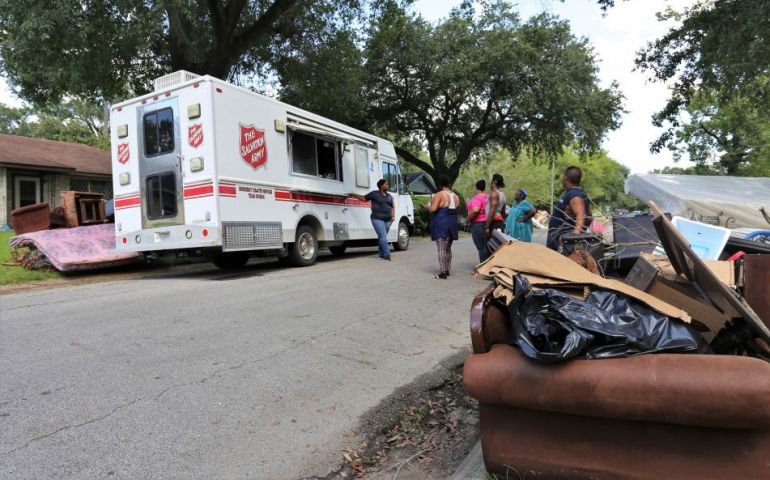 Houston, Texas (September 27, 2019) – After Hurricane Harvey, Richard Abram and his wife, Dawn Abram, 20-year Kingwood residents, joined the Facebook group, Flooding Kingwood With Kindness, and since then they have worked with the group to organize relief efforts to help neighbors after disasters.

The Abrams’ home was left underwater earlier this year in May after flooding, and now again by Imelda, but Richard refuses to not help his neighbors in need. He has organized a donation drive so large that he had to move it from his driveway to the Elm Grove Community Club Pool Center.

“I have neighbors worse off than I am,” Richard said. “It’s wrong for me to sit at home and do nothing. God has his own way of bringing people together. I’m seeing people that would have never spoken to each other before, cry in each others’ arms. When something like this happens you become aware of each other and you start seeing the other person.”

Abram informed his network of friends and colleagues about his drive and has since received an outpouring of donations, love, and support. His mother was an activist, so he says doing good and being generous is in his blood. But, he stresses that this time isn’t about one person, it is about a community banding together to help each other in their time of need.

“As a community, we’re banding together to make things happen. It’s an US thing, but we need all of the support we can get. I hope we continue to grow. I’ll find us an even bigger place if needed. People have lost everything.”

Currently, The Salvation Army is still helping and providing support for as long as it is needed.

“It’s never a no with The Salvation Army. It’s let me see how I can help; how else can I help? They keep their word and I know we can rely on them to do what they say they will do.”

For more information on The Salvation Army’s current disaster response efforts go to www.disaster.salvationarmyusa.org. To make a financial donation to support the ongoing relief work please got to www.helpsalvationarmy.org or call 1-800-SAL-ARMY.

Dallas, Texas (September 25, 2019) – The Salvation Army units in Southeast Texas have been out in their respective communities delivering practical support to those affected by flooding from Tropical Storm Imelda. As residents work to clean and gut their homes, many have noted that recent flood levels were worse than those experienced in the aftermath of Hurricane Harvey in 2017.

Staff from The Salvation Army in Beaumont spent Tuesday morning preparing 150 sandwiches that were delivered to a badly flooded area of the city. The EDS team carefully navigated the mobile kitchen through neighborhood streets lined with furniture, carpets, dry wall and household appliances ruined by more than a foot of water that entered homes. “We were prepared over the weekend to shelter people at The Salvation Army who were displaced in our community and focus has now shifted to feeding in areas of the city that have experienced significant flooding,” said Captain Jason Moore, Commanding Officer of The Salvation Army in Beaumont. “We anticipate delivering food and drinks again on Wednesday and for as long as we are needed.”

Damage assessments in affected communities throughout the region are ongoing and The Salvation Army continues to coordinate with State and Local Emergency Management staff across the affected areas. The Salvation Army team from Orange visited several cities on Tuesday afternoon, providing a hot meal, snacks and drinks to anyone in need.

After serving meals to a family of five in Mauriceville, a lady approached the Rapid Response Unit from the adjacent home. “We offered her a meal and drink, but she declined as she approached the truck,” said Captain Francisco Zuniga, Commanding Officer in Orange. “It quickly became clear that this dear lady was completely overwhelmed with her current situation and desperately needed someone to talk to. I was happy to share a moment or two with her and privileged to pray with her. She lost her husband four years ago and then experienced the almost total loss of her home after Hurricane Harvey. Life was just beginning to return to normal when her home flooded again last week,” said Zuniga. “This was a timely reminder for me that The Salvation Army’s ministry during times of disaster goes way beyond simply delivering a sandwich or bottle of cold water. Our emotional and spiritual care continues to make a difference in the lives of people who find themselves in crisis, and what an honor it is to pray with them.”

Corporate partners and other disaster agencies continue to play an integral part in The Salvation Army’s response efforts in Southeast Texas. A tractor trailer load of water and dry snacks arrived at the disaster warehouse in Beaumont, Tuesday, courtesy of Walmart, in addition to a truck load of food boxes from the Midwest Food Bank. “We are so grateful for the support of Walmart and the Midwest Food Bank, along with our other valued partners,” said Alvin Migues, Emergency Disaster Services Director for The Salvation Army in Texas. “As recovery efforts continue across the region these relationships will allow The Salvation Army to provide much needed practical assistance as individuals and families work to put their homes, and lives, back together.”

Assistance continues in Liberty, Chambers, Harris, Montgomery, Orange and Jefferson counties. Beginning on Thursday, The Salvation Army will partner with St Vincent DePaul in Winnie, Texas, one of the hardest hit communities, providing a truck load of cleanup kits and food boxes at St. Louis Catholic Church. A mobile kitchen from The Salvation Army of Bryan College Station will also be onsite providing snacks and hydration.

Financial donations can be made at helpsalvationarmy.org or by calling 1-800-SAL-ARMY to support response efforts following Tropical Storm Imelda. For the latest information please go to www.disaster.salvationarmyusa.org and watch for regular updates on our social media pages at www.facebook.com/SalArmyTX/ and www.twitter.com/salarmytx

Dallas, Texas (September 22, 2019) – The Salvation Army Emergency Disaster Services (EDS) team is monitoring the flooding occurring due to Tropical Storm Imelda moving through Southeast Texas. Several units in the area have already provided service to those affected and additional EDS teams are on standby and prepared to deploy if needed.

“We have been in touch with our Salvation Army units around the state and have put several mobile feeding units on standby in anticipation of feeding needs in the affected communities,” said Alvin Migues, EDS Director for The Salvation Army in Texas. “We are in regular contact with local and state Emergency Management staff and are already coordinating response efforts where roads are now passable. In the coming days we expect to have a clearer idea of the particular areas that need help.”

The Salvation Army facilities outside the affected area are open for evacuees seeking shelter and a number of response operations have taken place in counties that have experienced flooding:

“The Salvation Army warehouse in Beaumont is in an ideal location to provide essential supplies to the affected area. We are making arrangements to ship cots, blankets, hygiene products and other bulk supplies there in preparation for distribution,” said Migues. “Our volunteers have been put on alert and we will begin moving additional people and equipment into the region as soon as it is safe to do so and we have completed our assessment of the situation. The Salvation Army is already working in many of these communities and we will continue to serve residents in need.”

Dallas, Texas (September 19, 2019) – The Salvation Army Emergency Disaster (EDS) teams in Southeast Texas are prepared to respond to heavy rain and flooding associated with Tropical Storm Imelda. Some areas have experienced as much as 30 inches of rain in the space of 24 hours and significant flooding has been reported throughout the region.

“We have six mobile feeding units prepared to respond in Southeast Texas with more units on standby,” said Kathy Clark, Associate Emergency Services Director for The Salvation Army in Texas. “We also have a Salvation Army field kitchen that has been supporting the work of volunteers in Orange, Texas for the last few months that is available with the capacity to produce up to 5,000 meals per day. We will be watching this developing situation very closely over the next 24 to 36 hours.”

On Thursday morning, The Salvation Army in Orange received a request to provide snacks and hydration at an Emergency Shelter set up at the North Orange Baptist Church where 62 individuals spent the night on Wednesday. In Galveston County, The Salvation Army shelter is open for anyone needing shelter from the storm and widespread flooding. “We had around 30 additional people stay in the shelter last night,” said Holly McDonald, Community Relations/Development Manager for The Salvation Army in Galveston County. “We will continue have an open door for anyone needing a dry, safe place to stay, including those who may need to evacuate their homes in neighboring communities.”

Many roads across Southeast Texas remain flooded at this time as rain continues to fall in the area. “We will continue to monitor the situation and will know better how and where we can provide service in the coming few days,” said Clark. “The Salvation Army will be ready to mobilize our trained emergency disaster services teams to meet both the practical and emotional needs of those affected by Tropical Storm Imelda.”

Financial donations can be made at helpsalvationarmy.org or by calling 1-800-SAL-ARMY to support response efforts in Southeast Texas.

5 Tips for Building Enthusiasm with Kids

General André and Commissioner Silvia Cox inspired more than 5,800 Salvationists during a four-city ...