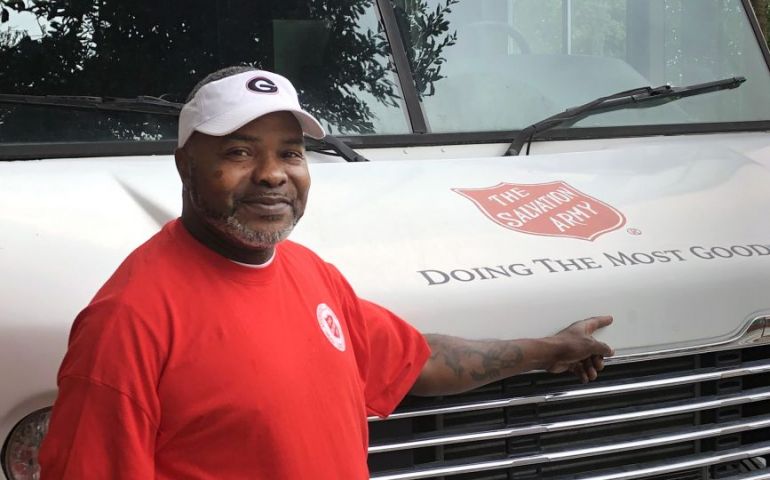 Savannah is located on the upper Georgia coast, nestled comfortably just before the South Carolina state line. It has endured its share of hurricanes over the years, but when Hurricane Dorian mushroomed into the second most powerful Atlantic hurricane on record and set it course toward Georgia’s largest coastal city, The Salvation Army put their emergency disaster services in high gear.

“Hurricanes are unpredictable, so it’s best to be prepared if one is headed your way,” says Major Paul Egan, The Salvation Army Savannah Corps Officer, “Dorian was a powerful storm and we help during these times by providing feeding, hydration and emotional and spiritual care to Emergency Operations Centers, disaster responders, and evacuees.”

Ahead of Hurricane Dorian, Georgia Governor Brian Kemp extended a state of emergency to 21 counties in South Georgia and declared a mandatory evacuation for individuals living east of I-95 in Bryan, Camden, Chatham, Glynn, Liberty, and McIntosh Counties. Among the evacuees were sixty Savannah Salvation Army rehabilitation center shelter residents who were evacuated to The Salvation Army’s shelter in Augusta…except for Bobby Harding. Bobby did not want to leave – he wanted to help.

Bobby is a barber by trade from Vidalia, Georgia, but at age 50, years of substance abuse had taken their toll and he found himself looking at a parole situation when he was given an opportunity to be part of The Salvation Army’s Corps Salvage and Rehabilitation Center in Savannah, Georgia. The CSRC is a Salvation Army ministry that helps those facing the challenges of drug and alcohol abuse rise above their circumstances.

“The Salvation Army has been such a blessing to me,” says Bobby, “When the evacuation order came, I just did not want to go. There are a lot of people in this world who need help, and I wanted to be there to help these people – to show them that somebody cares.”

Bobby and a few others from The Salvation Army’s Savannah rehabilitation center shelter program joined the dedicated Salvation Army officers and staff who stayed behind to serve their community in the face of the potential destructive forces from Hurricane Dorian.

“Bobby was always there with a smile, ready to do whatever was needed,” says Linda James, Business Director for The Salvation Army of Savannah, “He helped load and unload trucks, he helped feed evacuees, and pushed those in wheelchairs to help them during evacuation process.”

Each day, in Salvation Army locations around the world, lives like Bobby are being transformed. Thanks to The Salvation Army, they discover a personal relationship with God, a deeper meaning to their existence, and a foundation of values.

“Bobby is a great example of what The Salvation Army can do in a person’s life,” says Major Egan, “Hurricane Dorian may have brushed by us this time, but we will be ready for whatever the next hurricane brings, and if it comes by anytime soon, I’m sure Bobby will be there with us again, serving our community in their in time of need.”

To date, The Salvation Army has served 6,000 meals, 8,100 drinks and 6,400 snacks to first responders and evacuees in 11 locations across Georgia located in Savannah, Augusta, Macon, Columbus, Douglas, and Waycross.

“Bobby and the rest of us will all be here to help evacuees as they return to Savannah,” says James.

Hurricane Dorian lashed out at the Georgia Coast as it passed by far enough offshore to spare Georgians from its full wrath. However, others were severely impacted by this year’s second Atlantic hurricane.

“Our thoughts and prayers continue to be with those impacted by this massive hurricane,” says Major Egan, “But I know that wherever people are impacted from this storm, The Salvation Army will be there.”

How you can help those impacted by Hurricane Dorian

The best way to help survivors and relief workers in a disaster is to make a financial contribution. Monetary donations allow disaster responders to immediately meet the specific needs of disaster survivors.

To make a financial gift to support Hurricane Dorian relief: 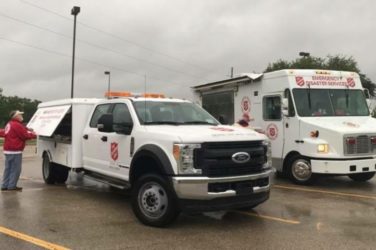 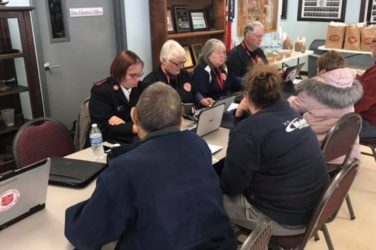 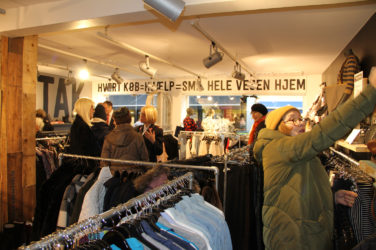 RECYCLING is a key concept at the newly-opened Salvation Army ‘Vintage and Redesign’ shop ...