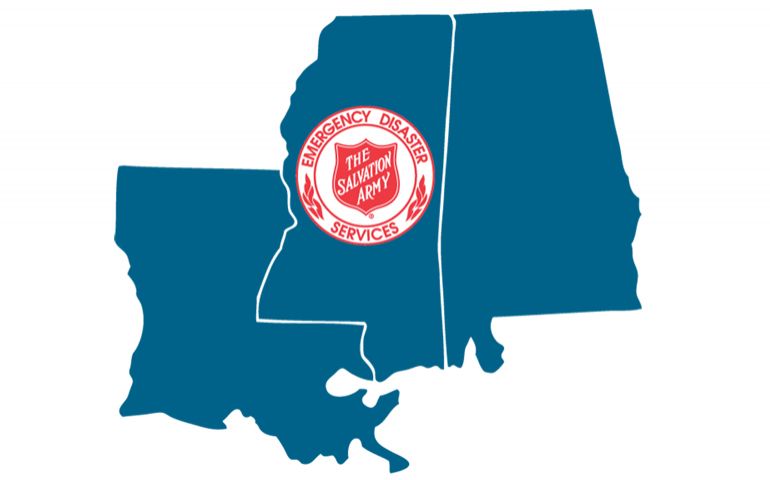 Jackson, MS (July 12, 2019) – Disaster personnel from across The Salvation Army Alabama, Louisiana, Mississippi (ALM) Division are gearing up to respond to the effects from what is predicted to be the first hurricane of the season. The National Hurricane Center has reported the tropical system is expected to make landfall in the next 48 hours producing heavy rainfall and flooding.

Preparation for this event began days ago when the ALM Division placed as many as 28 Salvation Army units on standby. These units are prepared, as needed, to provide disaster relief equipment and personnel to affected areas along the Gulf Coast and affected areas inland.  Service delivery will include the deployment of canteens stocked with meals, snacks and hydration and trained personnel to provide emotional and spiritual care. Each mobile feeding unit (canteen) has the capacity to provide anywhere from 500 to 1,000 meals per day.

To maintain situational awareness, The Salvation Army disaster personnel are working in close coordination with local and state emergency management partners which aids in the identification of the most affected areas and determination of entering that area when it is deemed safe to do so.

Terry Lightheart, the ALM Division Emergency Disaster Services Director stated, “Preparedness and partnerships are key to an effective disaster relief response and recovery. The Salvation Army seeks to “Do the Most Good” which includes providing much needed resources to the communities where we serve in a time of need.”

For additional information, go to https://disaster.salvationarmyusa.org/news/

If anyone wants to help, we are not accepting in-kind donations at this time. To make a financial contribution please go to our website at helpsalvationarmy.org

As first potential hurricane of 2019 heads toward U.S., Emergency Disaster Services experts are in position to respond, encourage preparedness

ALEXANDRIA, VA (July 12, 2019) – The Salvation Army is prepared to respond to the impact of Tropical Storm Barry, the first tropical storm of the Atlantic hurricane season to hit U.S. soil. Trained disaster relief workers and volunteers are prepared to meet the immediate needs of survivors and first responders by providing food, hydration, shelter, and emotional and spiritual care in Louisiana, Mississippi, Texas and other Gulf Coast states threatened by the storm.

Tropical Storm Barry is expected to make landfall Saturday as a Category 1 hurricane. The storm’s slow movement toward the coast means extended periods of heavy rain in vulnerable low-lying areas, including New Orleans, which started seeing flooding as early as Wednesday morning. Forecasts call for up to 20 inches of rain in some parts of the state through the weekend, and mandatory evacuations have been ordered for 10,000 residents.

With more than 7,600 centers of operation in the U.S., The Salvation Army is uniquely positioned to support survivors of wide-scale disasters, because they’re often the first on the scene and they stay until the need is met. Mobile feeding units – which can serve an average of 1,500 meals per day – can be deployed to serve meals, snacks and drinks, while trained response staff provide spiritual and emotional care.

“For more than 100 years, The Salvation Army has been serving communities before, during and after a disaster strikes,” said Col. Ward Matthews of The Salvation Army. “The Salvation Army is well-prepared and ready to mobilize our trained staff and volunteers to provide holistic aid to those who may be impacted by Tropical Storm Barry.”

As the Atlantic hurricane season begins, The Salvation Army reminds residents throughout the country to be prepared:

Create a family emergency plan, with evacuation locations and communication alternatives.
Build a disaster kit with the most essential items to survive for three to five days, starting with drinking water, essential medications and photocopies of identification documents.
Know your neighbors. In a major disaster, first responders can be very busy, so your first source of assistance may come from those who live right next door. Plan to check on elderly neighbors and those with special needs to help make sure they are all right after the disaster.

Check your insurance policies for gaps in coverage. Know how to shut off your home’s water, gas and electricity if necessary.

Listen to your local news, and be aware of the weather. Know what type of storm is coming, and heed the warnings of authorities.

Jackson, MS (July 10, 2019)— As the first potential hurricane of 2019 brews in the Gulf of Mexico, The Salvation Army Alabama, Louisiana, and Mississippi Division disaster personnel are working closely with local and state emergency management officials to monitor the situation.

Severe thunderstorm warnings, tornado warnings, and localized flooding have already occurred in New Orleans. The National Hurricane Center is predicting similar conditions to continue over the next 48-72 hours as the system tracks along the coastline from Mississippi to Texas and many parts inland. 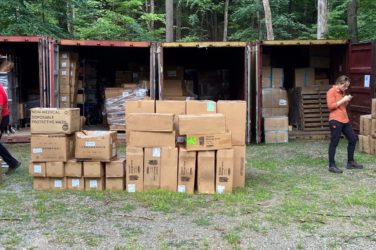 SALVATION ARMY Emergency Disaster Services personnel in the USA are dealing with the immediate needs of first responders and survivors ...