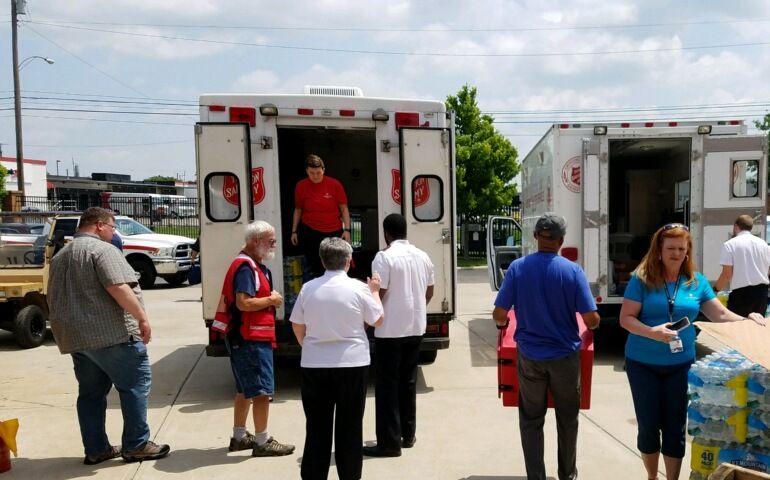 Day 2 of The Salvation Army’s Multi-agency Resource Center is underway in Dayton Ohio and the need continues to be great in the region.  The operating hours each day are from 1 pm – 8 pm, and by shortly after noon on Friday, there were already people lined up outside.

This series of storms struck multiple areas in the region, but several of the areas were already struggling with low employment and poverty.  This makes these areas especially vulnerable to disasters and emergencies.  Cassandra Dencher, a Salvation Army volunteer, stated, “Many of these men and women were hurting before the storm, and this just makes things worse.

Multiple agencies from the community have set up supply tables and were offering materials to survivors in the center including, Operation Blessing, The Good Neighbor House, St. Vincent De Paul, the Montgomery County Library, Able, Legal Aid of Western Ohio, and many more.  The center is scheduled through Tuesday, June 11, 2019, but the help, like the need, will not stop then.  The Salvation Army is already putting a long-term plan together for those impacted by the storms.

Relationships matter and this is no clearer than during a disaster. As the Dayton Ohio region begins the long process of recovering from its recent storms and their impact, The Salvation Army established a Multi-Agency Resource Center, where many varied agencies can come together, to better serve the region.

The concept of a Multi-Agency Resource Center (MARC) is to bring a large group of service providers together in one place.  This allows the most “bang for the buck.”  Individuals can come to one location for all of their potential needs. The MARC being organized by The Salvation Army will have representatives from legal aid, St. Vincent DePaul, Lutheran Social Services, Operation Blessing, the Red Cross, and Several County Govt. Offices. This strategic assembly of emergency responders building connections allows for more people to receive the assistance they need.

In addition to cultivating institutional relationships, one cannot overlook the importance of developing personal relationships as well. The more time we spend together, the better we understand each other’s skills and this ultimately means that we are able to respond more effectively and efficiently.  We can get more done together.  Seth Ditmer, the Dayton Tornadoes logistics chief, and Deputy Director for Operations with the Greater NY Salvation Army Emergency Services stated, “There are so many people working, but when we are able to connect, we get more stuff done.”

One of these valuable partnerships is between The Salvation and the Midwest foodbank. As a faith-based organization, the Midwest Food Bank aims to share the love of Christ by alleviating hunger and malnutrition locally and throughout the world and providing disaster relief; all without discrimination. This work aligns well with the work of The Salvation Army as we look to meet human needs in Christ’s name.

“One week later, it is still devastating to see the destruction in these communities and hearing the stories from those affected,” explained Major Robert Klenk of The Salvation Army. “Our officers and volunteers are supporting in any way that we can, from offering food and drink, to providing spiritual support during this difficult time.”

To date, The Salvation Army has served nearly 8,573 meals, 15,729 drinks, and 9,033 snacks to those impacted by the storms. These numbers continue to grow exponentially as the team will be on the ground serving the ravaged community for the next several days and weeks to come. The Salvation Army’s team of volunteers and officers to date have executed approximately 350 volunteer hours in the area, operating 4 canteens and 2 ATVs to bring resources to affected areas. The Dayton Kroc Center is currently being utilized as the central feeding hub for response efforts. The Salvation Army is helping these neighborhoods. At this time, monetary donations are being accepted by visiting helpsalvationarmy.org, or by texting STORM19 to 41444.

Operations continue in the Dayton Ohio region following this week’s deadly tornado outbreak that struck the state.  As they serve, volunteers continue to discover pockets of individuals who haven’t received assistance.

The Salvation Army’s food distribution continues via their mobile kitchens. Volunteers are continuing to reach into the hardest hits areas.  As roads throughout the region are being cleared, more pockets of individuals are being discovered and some have not been able to access any assistance. Based on the needs being observed by volunteers, additional resources are being distributed including, items for pets, candy for children, and laundry soap.

During Saturday’s distribution, an apartment complex was discovered that had been completely destroyed.  Residents were in the area with authorities and were given 2 hours to gather up what they could from their homes. As volunteers approached them with meals, they were met with hugs and tears. One survivor could not stop saying how glad they were to see The Salvation Army.

CINCINNATI, OH (May 30, 2019)– The Salvation Army of Cincinnati and Northern Kentucky continues to assist communities hit by a series of powerful tornadoes that struck Dayton, Ohio late Monday evening. The Salvation Army has been on the ground supporting and supplying aid since early Tuesday morning. Canteens (mobile relief units) from Dayton, Columbus, Cincinnati, and Lexington have been providing residents with meals, emotional and spiritual care, hydration, and snacks.

One of the great challenges is the number of roads closed by downed power lines and other debris, which block access to impacted areas. Using a Salvation Army Polaris UTV, many neighborhoods have begun to see relief through food and water delivery.

“The relief efforts have proved to be particularly challenging, as much of the storm hit an urban area of the city,” explained Major Klenk of The Salvation Army. “We have been working tirelessly to get our vehicles into areas where trees and power lines have been destroyed, to better aid and assist those who have been directly affected.”

To date, The Salvation Army has served nearly 3,000 meals, 10,000 drinks, and 4,000 snacks to those impacted by the storms. The Dayton Kroc Center is currently being utilized as the central feeding hub for response efforts. The Kroc Center, in cooperation with local emergency management, is ramping up as a distribution site, mainly for bottled water and other necessities. Many of those areas hit by the severe weather are poverty stricken and will require long-term help.

“With some water and power being restored to area neighborhoods, people think life is back to normal. For many in our community, restoration and recovery is a long process just beginning,” stated Major Gayle Senak, Dayton Kroc Center Administrator.

Additionally, teams of trained Salvation Army emotional and spiritual care personnel have been deployed to help with the multitude of emotional or spiritual issues survivors may experience.

At this time, additional resources are not being requested, but extra canteens are on standby should they become necessary over the coming days.

The Salvation Army continues its work serving the hardest hit areas of the state after a series of powerful tornadoes struck Ohio.

The SWO Division has been responding since day one across the impacted areas with several areas suffering significant damage, the hardest hit area being in the greater Dayton area. The Dayton Kroc Center is currently being utilized as the central feeding hub for its response efforts, with 4 feeding canteens being supported across the areas of impact. The Kroc Center in cooperation with local Emergency Management is ramping up as a distribution site, particularly for bottled water and other resources.

Teams of trained Salvation Army Emotional and Spiritual Care personnel are being assigned to each of the canteens to help with the multitude of emotional or spiritual issues survivors may experience.

At this time, they have an additional three canteens on standby (one from within the SWO Division and one from Toledo). Additional resources are not being requested currently, but may become necessary over the coming days.

Dayton, OH – As the sun came up this morning over the Dayton, Ohio region, the actual impact of the overnight EF3 tornado was finally realized. The path of damage and debris left behind dozens of damaged structures, widespread injuries, and at least 2 deaths.

Crews from The Salvation Army were on the ground at first light assessing the damages of their facilities but also checking on neighbors and finding out what they could do to help.  It was quickly realized that this was going to be a major event.

The SWONEKY Division currently has three canteens deployed to the Dayton Kroc Center for food service needs beginning with today’s lunch and dinner. In addition to the Dayton Kroc canteen already on-site, canteens have been provided by Columbus Chapel at Worthington Woods, with a team, and DHQ, with a team from the Lexington Corps. According to Major Bob Klenk “These Salvation Army mobile feeding units can get into the areas and to the people who need help.”

The damages are still coming in, but The Salvation Army will continue to be there providing assistance. Major Klenk added, “We were in the community long before the storm, and will be here long after it’s all cleaned up.”

The Salvation Army in New Zealand is on standby to provide assistance to people affected by the 7.5-magnitude earthquake that ... 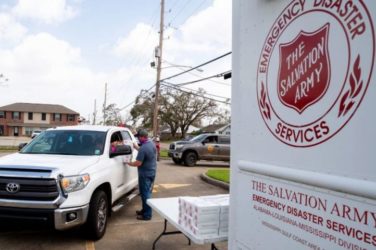 The WALMART FOUNDATION DONATES $500,000 to The Salvation Army for Hurricane Laura Response