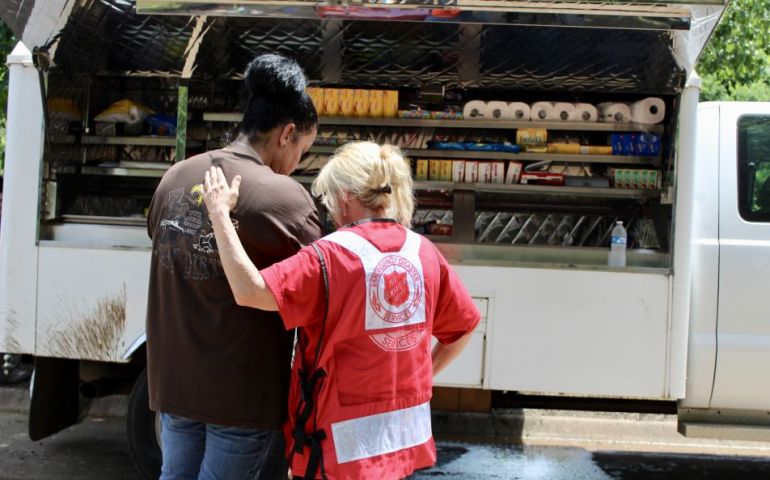 Sharon is the “neighborhood grandma” to many children in the two-block underserved neighborhood where she lives.  Her house is always full of people – she welcomes one and all to sit at her table. She is the caregiver for her 32-year-old son who is quadriplegic after being stabbed five years ago.

The canteen crew met Sharon the day before as they served food in her small neighborhood. She invited them into her home full of children and shared her story. She asked them if they would come back the next day to pray with her son.

“Come back tomorrow when it is quieter. I would like for you to pray with my son.” The crew eagerly agreed.  When disasters impact communities, The Salvation Army serves the whole person – physically, spiritually, and emotionally.

When the Salvation Army team arrived at Sharon’s house the next morning, they were led to a tiny bedroom with a broken, air conditioner unit. Sharon’s son lay on a special bed, waiting for the team. The crew of three gathered around his bed with 15 other people and prayed for him, his health, and his family.

“The Holy Spirit was in the room.  It was present and right in the middle of us,” said one of the canteen workers. “The scripture that kept coming to my mind was 1 Peter 5:7. Cast all your anxiety on him because he cares for you. We were there to minister, but we were ministered to as well by this wonderful, faithful family.”

Emotional and spiritual care is a large component of The Salvation Army’s care during disaster response.  As canteen (mobile feeding unit) crews roam neighborhoods, they often meet people who truly want more than just food for their bodies, they want food for the soul.

The Salvation Army Metropolitan Division is providing meals for all working TSA agents for ...