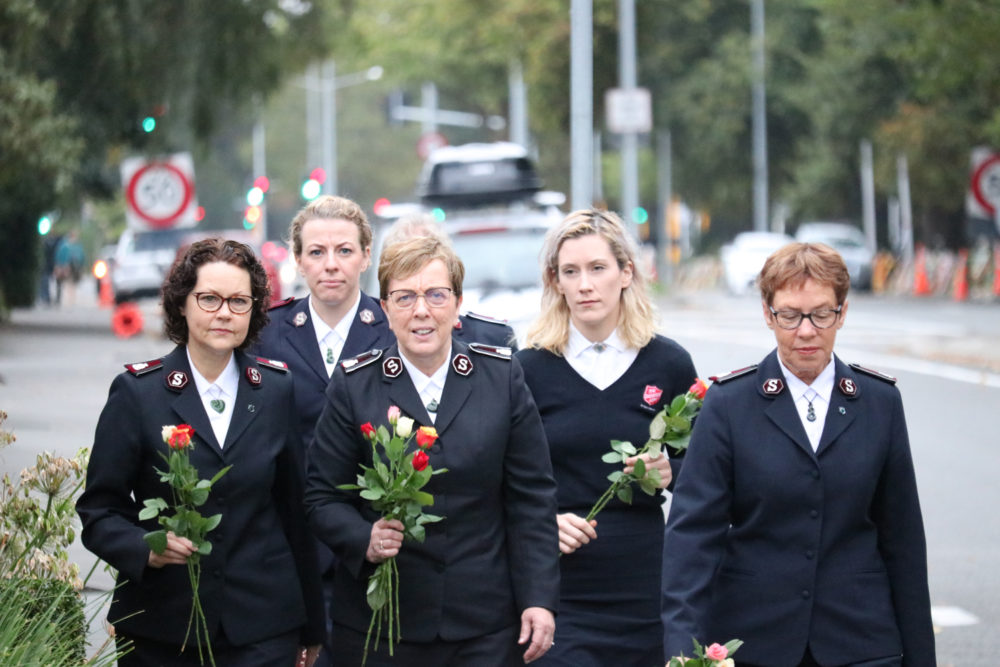 Organised by the New Zealand, Fiji, Tonga and Samoa Territory’s Women’s Ministries Department, the tour was a homecoming of sorts for the international visitors, with Commissioner Rosalie having served in the Northern Division for two years and Commissioner Bronwyn being a proud Kiwi!

The visit began in Christchurch, which was still recovering from the recent terrorist attacks. Women from all over the South Island travelled to be a part of the much anticipated #WMtour2019 event, with 220 in attendance on Saturday before a combined service on Sunday morning.

Early on Sunday morning the tour party laid fresh roses outside the Al Noor Mosque where 42 people had died on Friday 15 March. After laying the flowers, the group stood silently, arms around each other, before Commissioner Rosalie prayed for everyone impacted by the unimaginable actions that had been fuelled by hatred. ‘Help us be the instruments of love and peace; help us to love our neighbour,’ she said. She prayed for the city of Christchurch and its people, that they would know God’s love and peace as they begin to rebuild from this tragedy.

During the morning church service, Commissioner Bronwyn spoke of the prayer support from around the world for Christchurch and what it was like for her to be in London, so far from home, during these days. She shared a phrase from the sermon given at Regent Hall Corps in London on the Sunday after the attack: ‘The holy happens amidst agony.’

‘We saw on the television images of people coming together, united in love regardless of religion, regardless of race – the holy happening amidst agony … And [today] I saw amidst those flowers the messages and thought again: the holy does happen amidst agony.’

Commissioner Rosalie preached with passion and zeal, whether to an overflowing congregation in Christchurch, at intimate officers gatherings or at public evenings in Wellington and Auckland. Seeing the mercy seats lined with people responding to God’s Holy Spirit was of great encouragement and reflected the hunger for more of God in the territory.

Her message about living with outrageous courage and unshakable confidence resonated with women, young and old, across the country.

Sharing her testimony, Commissioner Bronwyn said how good it was to be home in a ministry capacity since leaving six years ago to serve overseas. Speaking from her personal experience of the cost of saying ‘yes’ to God, the commissioner encouraged women to take up their cross and place their confidence in God, who is trustworthy.

Divisions took responsibility for the structure of their events, including Central Division hosting a coffee and dessert evening where all three guests participated.

Captain Krista ministered throughout the tour with singing and a blend of sign language, dance and mime. ‘I don’t really know what to call it!’ she said. Whatever it is called, it drew people into God’s presence and expressed his great, all-consuming love for them.

In Auckland, 42 young women and corps leaders ‘chewed the fat’ over pizza with the international visitors. In moments of engagement and passion there were some tough questions asked back and forth. The commissioners both spoke of their heart for young women, and their desire to see change that benefits the coming generation of women leaders.

A stunning rendition of ‘Nau Mai Rā/Welcome Home’ was performed as the leaders were brought to the platform to be greeted by the 200-plus crowd. The English version of this song was sung to Commissioner Rosalie when she and her husband were welcomed to the division a dozen years ago.

Territorial President of Women’s Ministries Commissioner Yvonne Westrupp reflected on the tour: ‘Women came with expectation and encountered God. There was Holy Spirit energy and power at each gathering. I was personally encouraged in my own spiritual journey and sense that God is at work in the territory in a powerful way. I am so grateful to Commissioners Rosalie Peddle and Bronwyn Buckingham and Captain Krista Andrews for their ministry. They were God’s gift to us for this time.’

NEWS RELEASE: The General Leads Retirement Celebrations for the Chief of the Staff and ...

This spring the territorial praise band The Singing Company is releasing its second extended ...