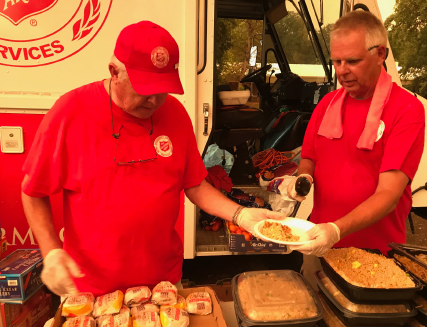 Adin, CA–The Salvation Army has deployed a group from Roseville and a canteen (mobile kitchen) to start a meal service later today at the Adin Community Center (605 CA-299, Adin, CA 96006) for residents who have been evacuated due to the recent Hat Fire in eastern Shasta County.

Local Salvation Army Emergency Disaster Services management plans for meals to be served through Sunday night and staff will continue to assess if further assistance will be needed for the foreseeable future.

Monetary donations are preferred at this time.  The Salvation Army uses 100% of disaster donations in support of local disaster relief operations.

Sacramento, CA–The Salvation Army Emergency Disaster Services will transition efforts to assistance centers for the Carr Fire in the Redding area and the Mendocino Complex Fire in Lake County.

Starting today, The Salvation Army is participating in the Disaster Recovery Center in Redding (2658 Hilltop Drive). The center will be open daily from 9 AM to 7 PM.

Tomorrow, Salvation Army representatives will take part in a Local Assistance Center at the Lucerne Alpine Senior Center (3985 Country Club Dr.). It will be open from August 10-17, with operation hours of 10 AM to 7 PM.

For either center, if possible, it is recommended that a resident bring a photo ID, household income information and insurance document.

In the past weeks, The Salvation Army had been serving meals at various sites throughout Northern California, assisting evacuees and first responders.  More than 20,000 meals were served in Redding and Weaverville, while more than 13,000 meals were distributed in Lake County and Mendocino County.

Sacramento, CA–The Salvation Army is still offering meals and emotional and spiritual care at the Carr Fire response in the Redding area and Mendocino Complex Fire in Lake County and Mendocino County.

A dangerous wildfire continues to burn near the city of Redding, CA in Shasta County. The Carr Fire, which spread late Thursday during an intense heat wave, has scorched 163,207 acres and is 45% percent contained as of Monday. There have been multiple fatalities – including firefighters. 1,080 homes and other structures have burned and another 1,223 are threatened. 38,000 people have been evacuated.

In addition to providing emotional and spiritual care, so far Salvation Army teams have served nearly 12,000 meals, 13,748 snacks and 25,494 drinks to evacuees and first responders. The teams continue to monitor the situation and will place personnel where they are most needed.

8/2/2018- Starting today, The Salvation Army and more than 40 other agencies are participating at a local assistance center at Shasta High School (2500 Eureka Way, Redding, CA 96001) for those affected by the recent Carr Fire in Shasta County.  Through Wednesday, August 8, caseworkers will be on hand to help local residents with recovery assistance. The hours of service are from 9 AM to 7 PM. If residents can, it is recommended to bring a photo ID, household income information and insurance documents to the local assistance center. Since last Friday, more than 12,000 meals have been served to evacuees and first responders.

8/1/2018- The Salvation Army is currently providing meals at Shasta College, Crosspoint, and Weaverville. We are also delivering food to Simpson College and Foothills. Today, the Santa Rosa Mobile Kitchen and the Cascade Canteen will be going to the burnout area where people are being allowed to return to what is left of their homes, and we will be providing meals, hydration, and emotional and spiritual care. So far- 9,931 meals and 12,580 snacks have been distributed. The Salvation Army has also deployed additional out-of-state personnel to assist the relief efforts in Shasta County.  Teams from Great Falls, Mont.; Helena, Mont.; Missoula, Mont.; Centralia, Wash. and Coeur d’Alene, Wash. will contribute to the existing meal services and emotional and spiritual care at Carr Fire evacuation sites in Redding and Weaverville.

7/31/2018- The Salvation Army will start a meal service tonight at two evacuation centers for residents who have been affected by Mendocino Complex Fire in the Lake County and Mendocino County areas. A team from Alameda County and Yuba-Sutter will provide assistance at Twin Pine Casino (22223 California 29, Middletown, CA 95461) while the San Rafael Corps will serve Lower Lake High School (9430 Lake St, Lower Lake, CA 95457).

Local Salvation Army Emergency Disaster Services management plans for meals to be served through Wednesday night and staff will continue to assess if further assistance will be needed for the foreseeable future.

General André Cox has approved the official opening of Salvation Army operations on the ... 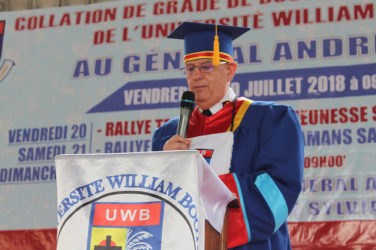