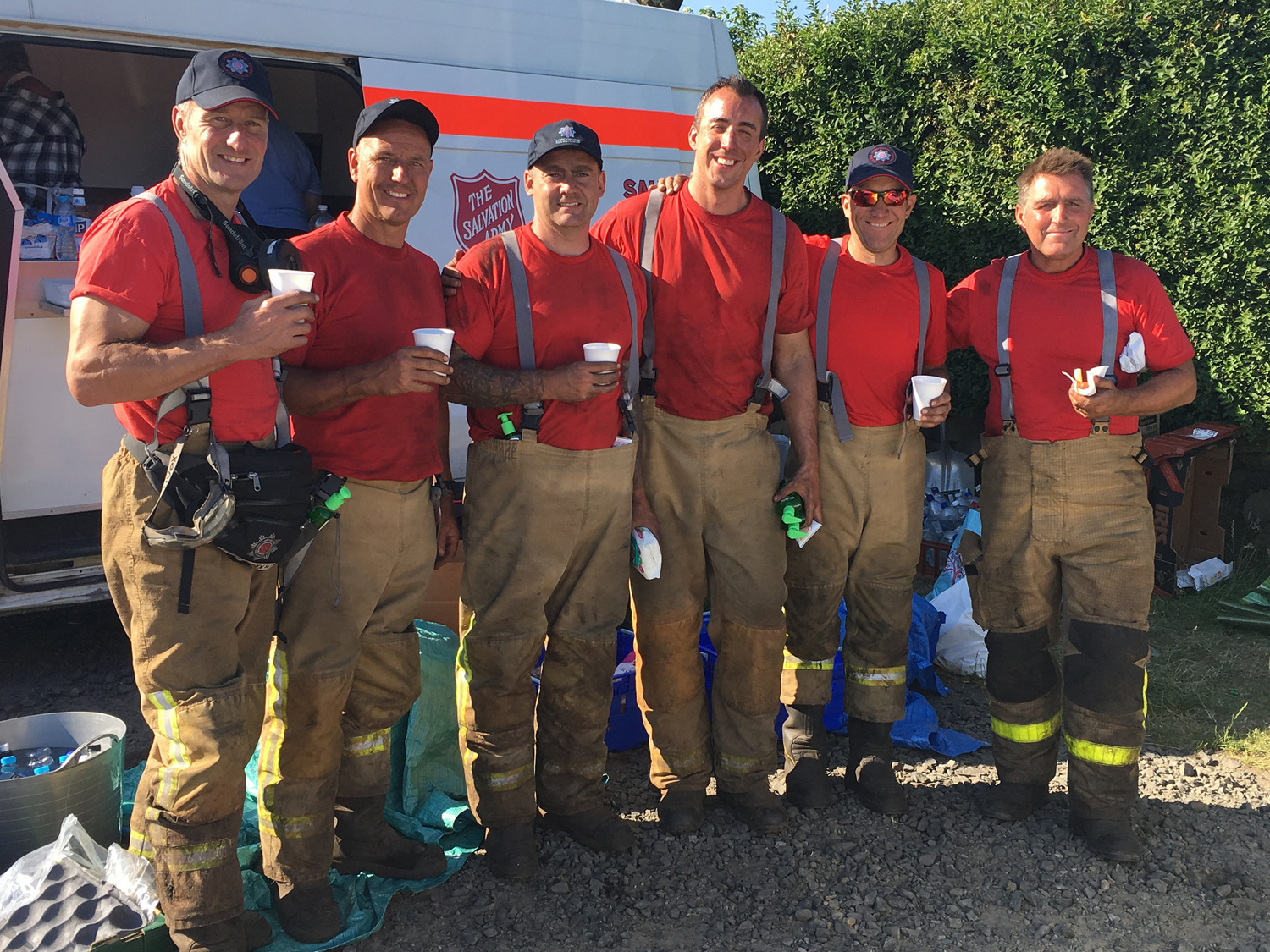 London, 24 July 2018/IHQ/ – WITH much of the northern hemisphere coping with high temperatures and long dry spells, wildfires are affecting communities from Greece right up to the Arctic Circle, claiming dozens of lives and damaging ecosystems, homes, livelihoods and infrastructures. The Salvation Army is responding in a variety of ways, according to local needs and in partnership with other agencies.

The world leader of The Salvation Army, General André Cox, is conscious that ‘the heatwave is creating chaos, fear, evacuations and loss’ and calls Salvationists and friends to prayer. He writes: ‘Those on the front lines need our support and those affected need our prayers.’

Extreme heat affects everyone, but the risks are greater for young children, pregnant women, older adults, people with chronic illnesses and the homeless.

Dangerous wildfires have been burning in numerous parts of California, USA. Salvation Army Emergency Disaster Services teams have been deployed to more than a dozen separate sites in Santa Rosa, Napa, Grass Valley, and Solano and Butte Counties. The initial emphasis was to provide meals and other urgent assistance to first responders and to residents evacuated from their homes. Now, the focus has shifted to distributing meals and providing emotional and spiritual care to residents re-entering areas which had been fire damaged. In Santa Rosa alone, Salvation Army teams have served more than 85,000 meals, provided $60,000 in gift cards and given away more than 18 tonnes of essential household items.

In the south of California, partnering with other agencies in Alpine, near San Diego, The Salvation Army has been a key provider of support at the Local Assistance Center set up to serve those affected by a wildfire which ravaged across more than two square kilometres and destroyed 18 structures. As well as food, water and store gift cards, emotional and spiritual care is being provided by Salvation Army officers and volunteers.

Across on the east coast – in Altona, New York – a Salvation Army team provided hydration to several hundred first responders involved in containing and extinguishing a large fire near Flat Rock State Park on the USA/Canadian border. ‘A team of volunteers provided snacks and water to the incident command post for distribution into the rough terrain that the first responders are operating in,’ explains Michael R. Schwartz, Divisional Disaster Director for the Empire State Division of The Salvation Army.

In British Columbia, Canada, 18 emergency community response units – equipped with stoves, fridges and grills – are on the scene after fires affected communities around Okanagan. More than 200 homes are subject to evacuation orders after fires blazed through dry scrubland. ‘We are uniquely positioned to respond quickly in times of crisis,’ explains Mike Leland of The Salvation Army. ‘Our priority is providing those being impacted with practical and emotional support to help see them through devastating circumstances.’

Across Canada, The Salvation Army is responding to rising summer temperatures by setting up cooling centres and distributing water. ‘We want to make sure there’s a place for people to sit inside if they need to just cool off, get some water and get hydrated, and make sure they’re not out in the hot sun and heat all day,’ spokesperson Major Rob Kerr explains. ‘Anything we can do to alleviate the conditions, we are going to do.’

Fires are also causing large-scale damage in Europe. In the North West of England, Salvation Army volunteers – led by emergency response coordinator Major Nigel Tansley – provided food and refreshments to blue-light services fighting a major fire on Saddleworth Moor that took more than three weeks to put out. In the first two days of the response, The Salvation Army provided support to in excess of 70 firefighters, mountain rescue teams, park rangers and farmers. More than 1,000 drinks were provided, as well as 600 chocolate bars and sandwiches using 40 loaves of bread.

Greater Manchester Fire and Rescue Service group manager for Tameside, Phil Nelson, says: ‘It is physically draining working at this incident and it is vital that our firefighters have regular breaks and that relief crews are available to take over. I would like to thank The Salvation Army for keeping our crews fed and watered during this incident.’

Support was also provided to emergency services dealing with a large grassland fire in east London.

Wildfires are also causing loss of life and property in Sweden, where more than 50 fires have taken hold in the Arctic Circle, and in Greece, where at least 60 people have been killed in fires that are tearing through an area that is popular with tourists. The Salvation Army’s International Emergency Services team has offered its assistance in both countries.

The General concludes with a request for Salvationists and friends around the world: ‘Please take a few moments to ponder the impact of these disasters and join me in asking our loving God for protection and his boundless love for those around the world facing uncertainty.’ 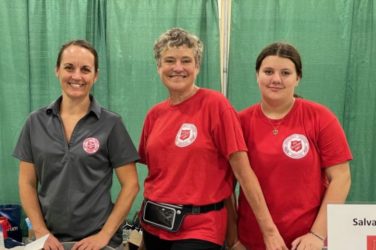 Assistance After Building Collapse in Worcester