Director of EDS Joel Arthur drove from Omaha to central Iowa Thursday to begin coordinating the division’s relief and recovery efforts. The Marshalltown Salvation Army Corps Community Center was among the many buildings in town that were damaged by the storms.

Now, Salvation Army personnel in Iowa will collaborate with personnel from other relief agencies to provide support to Marshalltown and the surrounding communities—including helping to form a plan for long-term recovery.

Major Jim Beardsley of the Des Moines Corps is working alongside Arthur in the relief and recovery effort.

The best way to help tornado survivors and rescue workers is to make a financial donation. Monetary donations allow disaster responders to immediately meet the specific needs of disaster survivors. Contributions to The Salvation Army’s relief work in Iowa can be made by donating online at https://donate.salarmywestern.org/iowatornadoes.

by Captain Catherine Mount The next opportunity to connect with The Salvation Army could ... 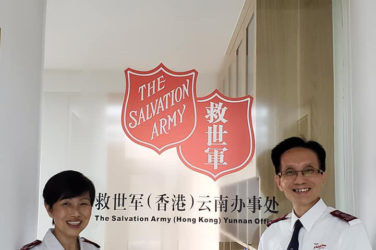 THE Salvation Army’s leader in Hong Kong has asked Salvationists and friends worldwide to ...