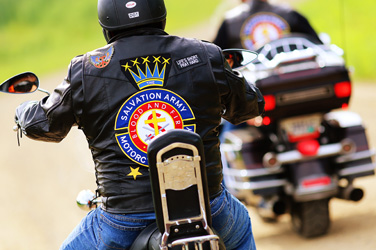 Under the motto, “He died for us, we ride for Him,” The Salvation Army Motorcycle Ministry (TSAMM) is making an impact for Christ in Chicagoland through the combined efforts of members from area corps.

Whether they own motorcycles or not, TSAMM members take their commitment to this ministry seriously promising “to make it a priority of their lives and Christian witness.” Men, women and families proudly belong to the fellowship. The Davis family—parents Terry and Karla, son Zach and daughter-in-law Mandy—belong to the Des Plaines, Ill., Corp, and Ron Felt, a member  from the Oakbrook Terrace, Ill., Corps, often brings his teenage daughter, Reagan, to events.

“Everyone is looking for a place to fit in; with some people that sense of belonging is found in the biker community,” Ron observed. “We as Christians have a unique opportunity here to love people into the Kingdom. We just have to look for new ways to reach out.”

Increasingly the group is being invited to share about this ministry at Salvation Army events and camps like Central Bible Leadership Institute.

Since TSAMM debuted in the Central Territory three years ago, Chicagoland members have held several “bike blessings” (often hosted by motorcycle dealerships and repair shops) at which bikes and their riders are individually prayed over, and they’ve collaborated with other Christian motorcycle ministry groups on outreach events.

They’ve also staffed information booths at biker shows and rallies and participated with other TSAMM groups in regional and national rides and rallies, most notably the world-famous Sturgis Rally in South Dakota’s Black Hills.

Earlier this year Chicagoland TSAMM members hosted an information booth at an international motorcycle show attended by more than 300,000 bike enthusiasts from around the world. The group’s members were excited to share God’s Word with such a large and diverse gathering. 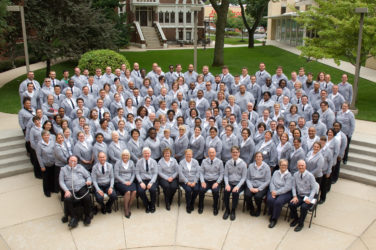 Stepping up to the Call

by Major Lesa Davis “This is an important night for the Central Territory,” declared Colonel Steve Howard, chief secretary, as ... 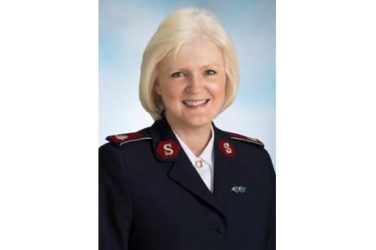 It’s all about trust

by Lt. Colonel Deslea Maxwell, Assistant Territorial Secretary for Program May the God of hope fill you with all joy and peace ... 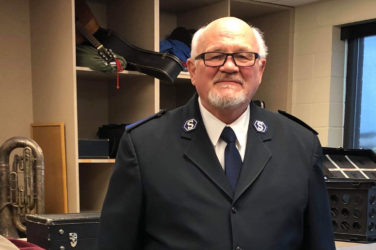 Back home again in the Army

by Elizabeth Budelman Nearly 50 years after Tom Robertson drifted away from Christ and The Salvation Army as a young ...