Worship, prayer and fellowship were vital facets of the congress. Music also played an important part with groups and soloists representing the vast expanse of Salvation Army ministry around the globe, including the Angola National Band, the Korean Fan Dancers, the Vasa Gospel Choir, the Hawaii Hula Hālau, the Seoul Samulnori Percussion, the India Central Youth Singers, the Ghana Band and Folk Dance Troupe, the London Citadel Timbrels, the Indonesia Bamboo Orchestra, and many more.

“It was great to see and hear the various styles of worship in other cultures,” recounted Chicago Staff Band trombonist Erik Olson, who was chosen with several other CSB members to perform a fanfare during the keynote session. “Although I could not always understand what they were saying, it was apparent that they were genuinely worshipping the same Lord that I worship.”

Main meetings followed the points of the General’s dream for the Army, revolving around the themes of joy, unity, service, compassion, cultural diversity, youth and integrity. Marked with pageantry, video and live action, sessions were filled with powerful messages and soul-stirring testimonies. Many of the life-giving and community-changing projects throughout the world also were highlighted.

“The meetings were explosive and thrilling. Every meeting encouraged soldiers and officers to get out into the world and share Jesus with the whosoever. I felt so proud to be an officer in The Salvation Army as I saw the massive amount of Salvationists from all over the world coming together for a common cause,” said Major Marlys Anderson, Farmington Hills, Mich., corps officer who attended the congress with seven soldiers from her corps.

For many, the fellowship—meeting Salvationists from all over the world and instantly feeling a connection as brothers and sisters in Christ—was the most exciting and cherished part of the congress. Of course, the favorite pastime of trading pins went hand in hand; soon lanyards, badges and bags were covered.

Multiple social media and web platforms were used to engage Salvationists worldwide during the congress, connecting them to the happenings in London and to share photos, tweets and Facebook messages from their locations. Main meetings were streamed live and are still available to view online, as well as the daily newspapers that were distributed during the event.

During the congress three Salvationists were admitted to the Order of the Founder, the Army’s highest honor. Fittingly the first award was given posthumously to former General Eva Burrows, known affectionately as “the People’s General,” on the same day that a statue of Catherine Booth was unveiled in London’s East End. The second award was given to William Flinn of the USA Western Territory. Known for his excellent musical leadership in the Army, he is also the executive director of the Tournament of Roses and is the first soldier to be a USA National Advisory Board member. Lastly Divisional Envoy Iris Jones of the United Kingdom was honored for leading a corps sacrificially and almost single-handedly—and without allowance (salary) for 30 years—all the while looking for innovative ways to share the gospel.

Congress days were packed with a plethora of extra events that complemented plenary sessions. A new musical Covenant (by Kevin and Karl Larsson and Commissioner Keith Banks) highlighted eight extraordinary real-life stories of Salvationists in the 20th century. A series of amazing concerts showcased the Army’s eclectic mix, including the four staff bands (International, New York, Melbourne and Chicago), the International and Amsterdam Staff Songsters, the Norwegian vocal band Mannssambandet, the Pasadena Youth Chorus, the Waverly Timbrels and others.

Delegates also could enjoy the Boundless Film Festival, attend seminars on Salvationist theology for today, faith and social justice, and One Army; or visit an impressive historic display or a “Supertrade” with all manner of Army goods and book signings by General Shaw Clifton (Rtd.), General John Larsson (Rtd.) and General Paul (Rtd.) and Commissioner Kay Rader. A special women’s gathering called “Bound-Less” featured Commissioner Silvia Cox and applauded the impact of women’s contributions to the mission and encouraged their spiritual development.

Major Judy Tekautz, Council Bluffs, Iowa, corps officer, succinctly captured what everyone felt, “I was so blessed to be a delegate.”

Boundless Kids enabled children and families to engage in the congress experience together. ALOVE was especially designed for delegates ages 11-16, with a daily afternoon event called NEON where young people could participate in photography, film, dance, reflection, a prayer labyrinth, sharing stories, games, competitions or arts and crafts.

Each day began with an intense international prayer meeting and ended with Late Night Alive, an informal chat show crammed with a variety of guests, two music groups each night, and a speedy “150-second” sermon by the main arena speaker that evening. The format proved highly entertaining, with one night even featuring a performance by a Super Staff Band comprised of members of all four staff bands at the congress!

The Central Territory’s two participatory groups added immensely to congress festivities. The Bill Booth Theater Company surely ranked as one of the busiest, giving one magnificent performance after another. Coming off a four-day pre-tour in England that concluded with a performance at Buckingham Palace, the Chicago Staff Band gave two back-to back concerts and was featured in several sessions, most prominently on Saturday night. For them, surely one of the most meaningful and lasting memories occurred after this meeting while the hall emptied out and Bandmaster Himes picked up his baton to lead them in an impromptu performance of “All that I am” to close his final season with the band. As they played, many delegates paused, and hundreds surrounded the CSB.

In the final session, the General called Salvationists to a total commitment. He asked, “What has this celebration been all about? What is going to change? What is God calling you to do? He continued, “We must be totally committed and dedicated to the task assigned to us. If we’re convinced of our call, we will live lives fully surrendered to God. Our worship needs to be more than speaking or listening to God. It must be about total surrender. We need a sense of urgency in a world where there is so much injustice and need.”

Following this meeting 2,500 Salvationists, representing all 126 countries where the Army officially works, marched down The Mall from the Horse Guards Parade to Buckingham Palace, cheered on by the public and 10,000 Salvationists and saluted by General André Cox.

“My takeaway is that the Army is still relevant as long as we continue to be grounded in God’s Word, as long as we are reaching out to serve others—especially the marginalized—and to share the gospel,” said Chicago Staff Bandsman Marty Thomas. “What resonated with me as a Salvationist was a call to personal involvement.”

HONOLULU (July 23, 2020) – As Hurricane Douglas continues on a track to potentially affect the Hawaiian Islands, The Salvation ... 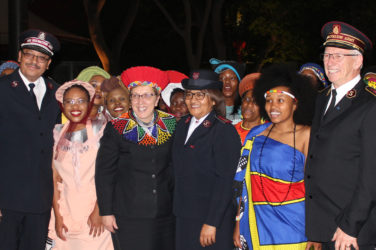 THE visit of General Brian Peddle and Commissioner Rosalie Peddle (World President of Women’s Ministries) to the Southern Africa Territory ...