In 1994 Robert and Ellen Dickman started a clinic offering free legal services to those living at or below the poverty line. Office space was provided by The Salvation Army’s  Detroit, Mich., Harbor Light Center. The clinic not only benefitted people in the community, but harbor light residents as well because legal issues could inhibit long-term success in abstaining from substance abuse.

Bob served as the clinic’s head attorney, and Ellen, a former educator and head of an international consulting firm, served as its executive director. The endeavor eventually became the William Booth Legal Aid Clinic, and a second location was opened in Pontiac, Mich., in 2007. To date, the clinics have resolved more than 23,500 legal issues for its clients.

The clinics also have served as stepping stones for the careers of more than 150 lawyers over the years, providing opportunities to work with clients on general advocacy, family law, divorce, child support, custody and parenting issues, criminal misdemeanors, landlord/tenant relations, credit issues, public benefits and entitlements.

When the Dickmans retired in late 2012, The Salvation Army celebrated the positive differences they’d made in the lives of so many people by asking the Detroit and Pontiac communities to make contributions to the William Booth Legal Aid Clinic Endowment Fund. Amy Roemer, current Booth Legal Aid Clinic director, said at their retirement celebration, “Together [the Dickmans] knew they could accomplish anything. And, together they did.”

Why invite the Wheelers?

Following are just a few reports from Salvation Army corps (churches) that have hosted campaign visits from Majors Joseph and ... 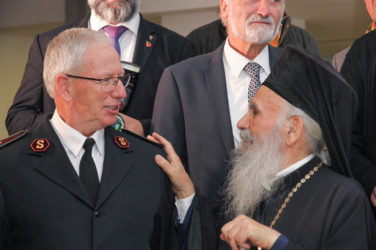 THE launch event of an exhibition to mark the 90th birthday of His Eminence Archbishop Gregorios gave opportunities for sharing ...