Central Territorial Headquarters (THQ) will be moving to a new facility in Hoffman Estates, Ill., northwest of Chicago in the summer of 2015. The move is the result of much prayer, discussion, study and planning.

In 2008 discussions began about the possible renovation of the existing THQ campus. It was becoming critical to upgrade the facility for more efficient use, to improve workstation standards and to better communicate and task-share between departments and, thereby, to better serve the field.

Several years of thorough analysis conveyed the purchase of a new headquarters facility would represent the best long-term stewardship of funds. Independent real estate consultants came to a supporting conclusion. THQ found itself at a crossroad. After much consultation and prayer, the possible renovation project was transformed into a relocation project.

At that point, a relocation committee, chaired by then Assistant Chief Secretary Lt. Colonel Richard Vander Weele, was formed to find a suitable structure located within 30 minutes of the current THQ campus. Initially, 16 possible buildings were identified and evaluated. The field of buildings eventually was narrowed to three locations from which 5550 Prairie Stone Parkway in Hoffman Estates, Ill., was selected. This building is not only newer and beautiful but economically and environmentally efficient. It most certainly will fill the vision that began in 2008.

“The new territorial headquarters building will provide sufficient space for current operations and growth, when needed, over the next couple of decades,” explained Lt. Colonel Vander Weele. “This will improve communication, collaboration and consultation between section leadership and departments.”

The new facility is right off the expressway at the Beverly Road exit on I-90 and is an easy trip to Chicago O’Hare International Airport.

This summer THQ employees and officers toured the building to acquaint themselves with the area and to get an idea of what the property has to offer. “My first thought or impression of the new building is its sheer size and magnitude, in comparison with our existing location, and the great potential for expansion, growth and new possibilities that this could mean for the organization and people we serve,” said Alberto Rapley, Jr., information technology director for the Adult Rehabilitation Centers Command, which is also relocating to the new property.

Renovations of the new facility are underway to tailor the interior space to meet the specific needs of THQ. The building is projected to be completed in the summer of 2015.

“It’s an exciting adventure,” said Major Cheryl Lawry, territorial property secretary. “I believe it will further the mission of the Army and we’ll serve the territory better.” 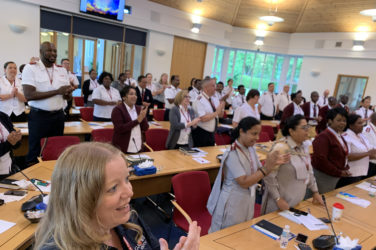 NINETY-FIVE leaders in children’s and youth ministry from 67 regions across the world gathered at Sunbury Court, near London, for ... 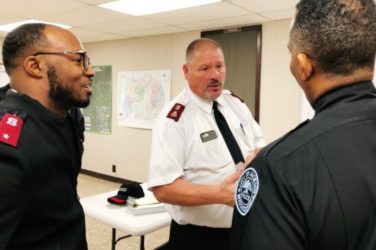 (February 20): The Salvation Army responded today in Copiah County as continued rain brought flash flooding. As there are still ...