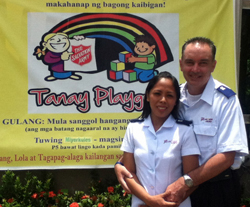 Matthew Beatty was recently described as “a true story of redemption and success” by a Salvation Army officer (pastor) who first met Matthew when he was a beneficiary of the Army’s Kansas   City, Mo., Adult Rehabilitation Center (ARC) several years ago.

“Landing in the ARC wasn’t intended as part of my life plan, but it was God’s way of providing me an escape from temptation,” said Matt who entered the residential work-therapy program to seek abstinence from substance abuse, spiritual regeneration and a responsible way of living.

“I’ll never forget the moment I fully accepted Christ. I never felt such calmness; the weight of a million problems lifted. I knew at that moment Christ was the absolute answer,” he recalled.

Matt knew there’d be no more bartering with God: “If You do this, then I’ll serve You.” Instead, he freely gave his life to God and developed a hunger for knowing Him.

“In the midst of a rehab facility I didn’t think God had any immediate plans for me, but I quickly realized how wrong I was,” said Matt. In addition to the required classes for rehabilitation and regeneration at the ARC, Matt began attending an optional class to learn more about The Salvation Army and soldiership (membership). “When I learned being a soldier was like an entry-level ministry position, I was so excited. This was exactly what I needed!” said Matt.

One month after graduating from the ARC program, he was enrolled as a soldier and began attending the Kansas City Northland, Mo., Corps, where he got involved in church life and continued to work fulltime managing thrift stores for the ARC.

“I received more lucrative job offers but felt God wanted me to stay with the Army. I knew He would provide for me after having started me on this wonderful journey!” he said.

The Northland Corps just happened to be mission partners with a corps in the Philippines.

Already interested in missions, Matt nearly jumped out of his pew when a short-term missions trip to the Philippines was announced.

“I could hardly wait to sign up; this was a serious deal! We spent months preparing for our 10-day trip during which we’d be ministering at the Manila Central Corps’ gospel arts camp and at the PhillipinesTerritoryTrainingCollege for officers,” Matt recalled. “I was so excited about the time and effort we were putting into our preparations. I even did additional studies on the culture and learned some basics of the Tagalog language to be better prepared. In the back of my head I wondered if God had something more in store for me there. I’d soon find out that, yes, he did!”

Once there it didn’t take long for the Holy Spirit to speak to Matt again. “Short of a voice from heaven, I had no doubt the Lord wanted me to serve there. Later that night, I talked and prayed about it with Major Andrew Miller and Major Rick Carroll,” Matt continued. “The next morning at breakfast Major Rick had a strange smile on his face: the training college principal was hoping to recruit someone from our team to stay and help.”

Matt said he couldn’t believe it! He didn’t know whether to yell or cry. “To make a long story short, just three months later I returned to the Philippines for the two most wonderful and special years of my life. I felt so honored God had chosen me to do this. He blessed me more than I ever could have dreamed with new friends, exciting adventures, ever-increasing ministry responsibilities and, most of all, a wife. How was I worthy of all this?” he said.

Today Matt and his wife, Rona, are serving as ministry interns assisting at the Northland Corps and hope to attend the USACentralTerritoryCollege for Officer Training in Chicago, Ill., and become Salvation Army officers.

“Even when I was enrolled as a soldier, I was keenly interested in officership,” Matt concluded. “I often wondered, ‘Could I do it?’ That calling never left me; it just increased over the years as God used circumstances in my life to continue leading in this direction.”

by Marjorie Remy   In high school I received a letter about studying abroad. At the time my parents and ...

“The ONE Conference: IMAGINE”—held in October 2013 by the USA Central territorial multicultural ministries department of The Salvation Army—featured a ...